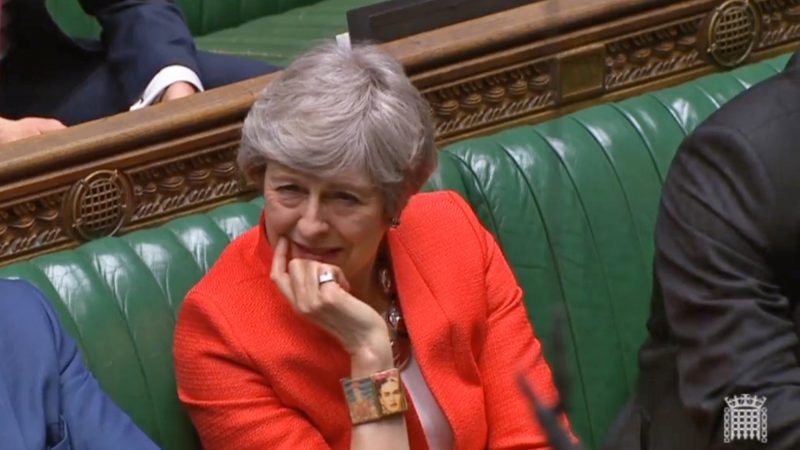 Theresa May reacts to Scottish National Party MP Ian Blackford pointing at her during a debate at the House of Commons in London on 12 March 2019. [EPA-EFE/UK PARLIAMENTARY RECORDING UNIT / HANDOUT]

Speaking after the announcement of the vote, where UK lawmakers rejected the Brexit deal by 391 to 242, a hoarse and dejected May expressed “profound regret” at the result, telling MPs that they would have a chance to vote on whether to accept a ‘no deal’ Brexit on Wednesday.

“This is an issue of grave importance for the future of the country,” she said.

The defeat of May’s Brexit deal opens the way for two days of votes in the House of Commons as MPs attempt to whittle down the multiple Brexit options still on the table.

In a demonstration of the splits within her Tory party, May told MPs that the party would hold a free vote on a ‘no deal’ Brexit. However, with the Conservative party split but almost all opposition MPs set to vote against a ‘no deal’ scenario, it appears increasingly likely that UK lawmakers will instead vote on Thursday for an extension to the Article 50 process.

That still leaves the options of a general election or a second referendum on the table.

For her part, May hinted that she will seek to take a ‘no deal’ Brexit off the table on Wednesday in the event of MPs voting against it.

“I am passionate about delivering the result of the referendum. But I equally passionately believe that the best way to do that is to leave in an orderly way with a deal and I still believe there is a majority in the House for that course of action,” said May, adding that she was “conscious of my duties as PM and of the damage this (a ‘no deal’) will do to the UK”.

In the meantime, the UK government will immediately ramp up its ‘no deal’ planning.

The result in Westminster was greeted with dismay by EU officials, with European Council president Donald Tusk and EU chief Brexit negotiator Michel Barnier insisting that the “impasse can only be broken by the UK.”

“On the EU side, we have done all that is possible to help the prime minister get the deal…it is difficult to see what more we can do. If there is a solution the current impasse it must be found in London,” said a spokesperson for the European Commission.

Phillippe Lamberts, a member of the European Parliament’s Brexit Steering group, insisted that “under no circumstances can the UK be allowed to crash out of the EU without a deal in just 17 days”.

“If the UK requests an extension to Article 50 and lays down a clear plan for overcoming the current impasse in the UK, then the EU-side should consider it,” he added.

EU diplomats say that there is no appetite for further negotiations on the terms of the Withdrawal Agreement among the member states. A decision on whether to grant a short-term extension would be taken at next week’s European Council summit.

Although the margin of defeat came as a surprise, the rejection of the Withdrawal Agreement became inevitable after May’s Attorney-General, Geoffrey Cox, concluded in a legal opinion on Tuesday morning that the ‘Joint Instrument’ and declaration agreed by May and EU negotiators in Strasbourg on Monday would still not allow the UK to unilaterally drop the Irish backstop, the key demand of Conservative MPs.

The “legal risk” of the UK being trapped in the Irish backstop “remains unchanged”, advised Cox.

As many as 75 Conservative MPs voted against the Withdrawal Agreement, as well as the 11 MPs of the Democratic Unionist Party, the government’s coalition allies. Only three Labour MPs voted for May’s deal.