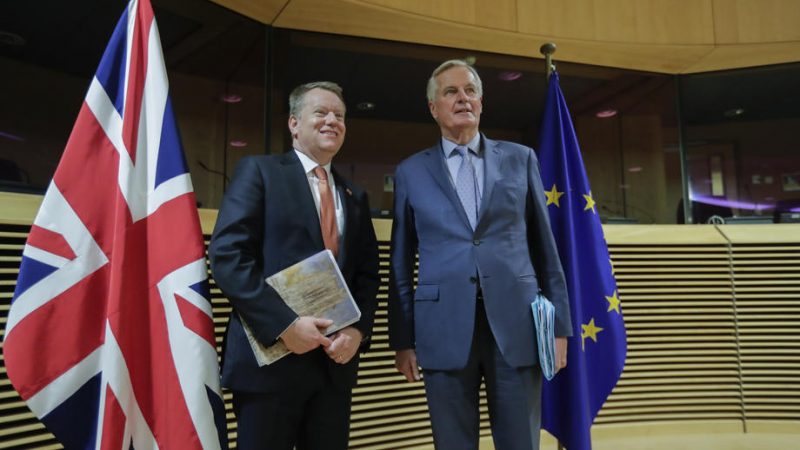 The UK has ear-marked September as its deadline for agreeing on a new trade deal with the EU after negotiators held their first face-to-face meetings since the start of the coronavirus pandemic. EPA-EFE/OLIVIER HOSLET / POOL

The UK has earmarked September as its deadline for agreeing on a new trade deal with the EU after negotiators held their first face-to-face meetings since the start of the coronavirus pandemic.

The EU’s Michel Barnier and UK counterpart David Frost met in Brussels on Monday (29 June), marking the start of their first in-person negotiating rounds as the two sides seek to intensify the pace of talks.

Little progress has been made in a series of week-long negotiating rounds by videoconference during the lockdown, prompting Prime Minister Boris Johnson and European Commission President Ursula von der Leyen to agree that talks will remain constant, alternating between week-long rounds in Brussels and London, throughout July.

However, on Monday, a spokesman for Johnson told reporters that the two sides will only have several months to break the impasse, commenting that “we’ve always been clear that talks can’t go on into the autumn.”

“We have spoken in the past about not wanting to be continuing having talks in October,” he added.

Although June had initially been marked as the deadline for a decision on whether a deal can be brokered this year, both UK and EU officials concede that the pandemic has pushed that deadline.

In a further hint that September is the new deadline for London, it was confirmed on Monday that Frost will take over as the UK’s national security advisor in September.

The post is currently held by Sir Mark Sedwill, also the head of the UK civil service, who announced on Sunday his plans to leave government service following a bitter power struggle with the prime minister’s controversial chief advisor Dominic Cummings.

That is likely to mean that Frost will hold both positions for at least a short period of time. Frost said on Monday that the talks with the EU will “remain my top single priority until those negotiations have concluded, one way or another”.

Fisheries and the so-called ‘level playing field’ binding the UK to the existing and future EU regulation and state aid rules remain the most issues of greatest difference between the two sides, along with the future role of the European Court of Justice in interpreting legal disputes and dispute resolution.

That pushes the onus onto the German government, which will take over the EU’s six-month rotating presidency on Wednesday (1 July), to broker a compromise.

At the weekend, Chancellor Angela Merkel warned Johnson’s government that it would “live with the consequences, of course, that is to say with a less closely interconnected economy,” if it stuck to its ‘red lines’.

“If Britain does not want to have rules on the environment and the labour market or social standards that compare with those of the EU, our relations will be less close,” Merkel added.

Commission spokesman Daniel Ferrie said at the start of this week’s talks that “our overall message this week, but also for the coming weeks and coming months, is to intensify our negotiations in order to make progress in order to get a deal”.

Meanwhile, the European Research Group of backbench pro-Brexit Conservative lawmakers sent its own missive to Barnier on Monday “to encourage the development of a sense of urgency in the negotiations”.