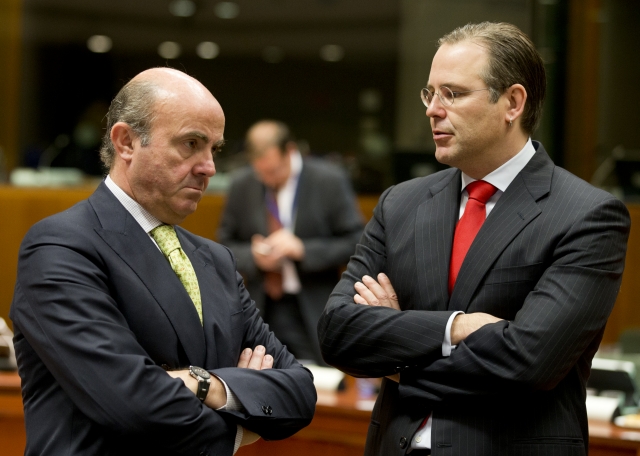 The United Kingdom and Sweden attacked the bloc of EU nations pressing ahead with a Financial Transaction Tax (FTT) after the group announced plans for the levy at Tuesday’s (6 May) meeting of European finance ministers in Brussels.

France, Germany, Austria, Belgium, Estonia, Greece, Italy, Portugal, Slovakia and Spain said a tax on shares and some derivatives would be implemented in their countries by 1 January 2016 at the latest.  Slovenia, the 11th member of the bloc, did not sign the joint statement, as the country is currently without a government.

“Viable solutions” to achieve an FTT, which would be broadened out overtime to cover more derivatives, must be finalised by the end of the year, they said. Participating member states could impose taxes on products not covered from the first step to maintain their existing taxes.  Italy, for example, already taxes several kinds of derivatives.

It made no mention on where the tax would be paid. The European Commission’s original 2011 proposal suggested a tax where two countries would collect on a transaction if it was cross border. This could now force a non-FTT state to collect revenue on behalf of a participating one.

At the meeting, Sweden has also blocked a compromise to close a tax loophole on hybrid loan arrangements over fears it could hurt a certain type of Swedish investment company, a model used by leading businesses such as Volvo and Eriksson.

UK Chancellor George Osborne said: “We will see the detail, but we will not hesitate to challenge a Financial Transaction Tax that damages the UK, other member states or the single market.”

The UK has argued FTT would have an “extra-territorial impact” beyond the bloc and that it would disproportionately affect the UK because London is home to the largest financial sector in the world.

On 30 April, the European Court of Justice rejected a challenge by the UK against the enhanced cooperation procedure, a legal mechanism that allowed the bloc to move forward with a European level tax without the unanimous support such laws usually require. The UK, which expected the challenge to fail, wanted to ensure the groundwork for a future challenge on the proposal itself was laid (read here).

Osborne also criticised a lack of transparency in the enhanced cooperation negotiations between the 11 nations leading to the four point statement. Under the process, other member states must be informed on the proposal. It is the first time the enhanced co-operation mechanism has been used in taxation and only the third time in the EU’s history.

He said, “The deal was in return [for agreeing to enhanced cooperation], the other member states were included in discussion, allowed into working group and understood the plan.

“Here we have a situation where 11 member states are working up their plans in secret […] we’re entitled to a clear explanation of what happened last night.”

Osborne added that they had only just been given the statement and had “five minutes” to read it. There was nothing in the statement on potential extraterritorial impact or detail on what kind of derivatives would be taxed, he said.

Osborne’s criticism was echoed by Swedish finance minister Anders Borg at the European finance ministers?’ meeting (ECOFIN). Sweden suffered economic turmoil after it introduced its own FTT in the 1980s.

“I am very disappointed with the process […] we did not support the UK when it started this legal case but we are much closer to doing that [now],” he said.

The Netherlands also said it was disappointed in the lack of detail in the statement, especially as it had previously expressed an openness to consider joining the bloc.

Germany’s finance minister Wolfgang Schäuble said, “We have decided nothing. We have only agreed a minimum political agreement to go on. We still need a strong legal examination[…] Perhaps the reaction has been a little for the cameras.”

“Of course you are right to discuss things, but first we had a necessity to find common ground. Not much common ground, but it is common ground,” Austria’s finance minister Michael Spindelegger added.

The statement was seen as needed at the last ECOFIN meeting before the European parliamentary elections as leading nations have made political commitments to progress the levy.

Natalia Alonso, head of Oxfam’s EU Office, said: “With the European elections just around the corner, ministers seem more concerned with window dressing for voters. Their current compromise does not yet amount to the ambitious FTT needed to ensure that the financial sector is finally made to pay its fair share of tax.”

Sweden also blocked a political agreement being reached on a compromise drafted by the Greek Presidency of the European Union to close a tax loophole on hybrid loan arrangements.

The Greeks had suggested splitting the Parent-Subsidiary Directive into two, hoping to allow closing the loophole faster (read here).

But Borg said that despite reassurances from the commission that the move would not harm a certain model of investment company, he would not agree to the compromise. “These are some of our most important industrial companies and we are not ready to take risks with them,” the Swedish minister said.

Ministers, who widely supported the compromise deal, agreed that experts would discuss the issue further with a few to political agreement at the next ECOFIN in June.

BusinessEurope's director general Markus J. Beyrer said, "This political agreement on the FTT is a step backwards in terms of putting Europe on the road towards growth and job creation. As we have consistently warned leaders, and as the majority of member states have also recognised, by raising the cost of capital the FTT threatens to lower investment levels whilst failing to improve financial stability. It is extremely unfortunate that a number of member states continue to insist on putting short-term political gains ahead of the long-term needs of workers, savers and investors."

Natalia Alonso, head of Oxfam’s EU office, said, “Not only have they delayed putting the tax in place until 2016, but they remain worryingly vague on the taxation of derivatives; a key cause of the financial crisis which represent at least two-thirds of the potential revenue. By failing to spell out how the money will be used, governments are sending a worrying signal to the poorest people in Europe and beyond. The FTT has always been associated with helping those hit hardest by the economic crisis and climate change, and leaders cannot back away from this now.”

Green commission president candidate Ska Keller said, "This is not even a ‘diet' version of a financial transaction tax. It’s simply window dressing. The tax base involved is far too small to have any effect – it’s just a campaign-crutch for the conservative and social-democratic governments who’ve agreed to it. "

The European Greens' economic and finance spokesperson Philippe Lamberts, said, “By announcing the gradual introduction of a financial transaction tax, starting 1 January 2016 at the latest, the Member States participating in the enhanced cooperation procedure want us to believe that they today took a decisive step towards financial regulation and social justice. This is not the case. They have instead definitively buried the ambitious proposal that was prepared by the European Commission on 14 February 2013.

"In short, with a cynical eye on the upcoming European elections, the ministers of the participating Member States have today carried out what is purely a public relations exercise in an attempt to polish up a dull and disappointing track record.  The sole merit of this clumsy attempt at grabbing the spotlight is that it highlights their glaring lack of ambition on this issue and their susceptibility to lobbying from the financial sector.”

Sally Nicholson, development policy and finance manager at the World Wildlife Fund's european policy office, said, “By agreeing on a Financial Transaction Tax today, eleven European countries have proved they are ready to make the financial sector pay their dues towards sustainable development. It is now up to other EU countries to follow suit. But the FTT’s revenues shouldn’t be a blank check to fill the States’ coffers. Governments must agree to spend a good chunk of these on eradicating poverty and fighting climate change.

"It would send a strong signal that the EU believes in living up to its international commitments in spite of economic setbacks at home and underline EU's continued leadership in development.”