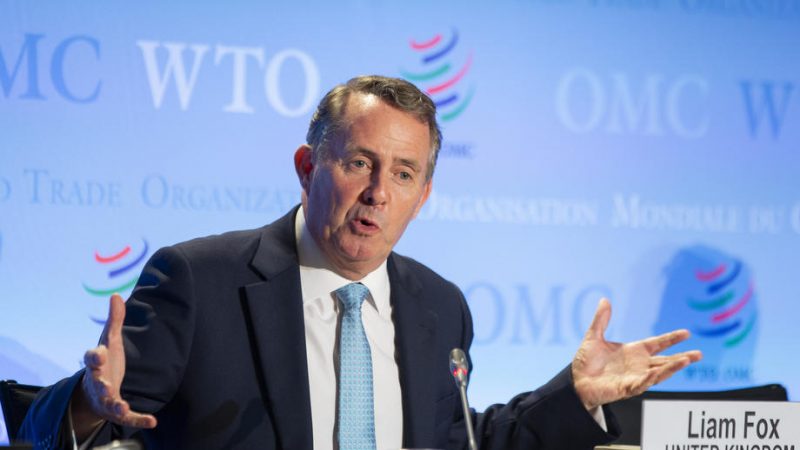 “Very fortunately, not everyone in the world sees every issue through the Brexit prism,” Liam Fox, a former UK International Trade minister, said at the Special General Council of the WTO.

“If I were to be elected the director-general… Britain would be one of 164 countries that would be looked after without fear or favour,” he added

Fox was the last of eight candidates battling to replace Director General Roberto Azevedo, who is stepping down in August, to speak during three days of auditions that started on Wednesday

There is no candidate from an EU country standing, while Trade Commissioner Phil Hogan decided against running for the post.

The UK has ear-marked the Geneva-based trade body as a priority institution in which it would like to hold influence having left the European Union in January and with its exit from the bloc’s Single Market less than six months away.

Despite this, Fox is widely believed to have little chance of securing the WTO job, with Geneva-insiders saying that there is no chance of EU countries backing him, though he does boast strong ties to the US Republican party and hopes that this will translate into support from the Trump administration.

US Trade envoy Robert Lighthizer has said that “a developed country should assume the responsibility,” a hint that Fox or South Korean candidate Yoo Myung-Hee could be favoured by the US.

However, with the US seen as one of the most obstructive countries in the WTO in recent years, blocking appointments to its appellate court and accusing the WTO of treating it unfairly, Washington’s voice is likely to carry less weight this time.

Talks on a new EU-UK trading arrangement have made slow progress since starting in February. With Boris Johnson’s government insisting that it will not extend the post-Brexit transition period, the prospects of trade between the two being conducted under WTO terms have increased, with the reintroduction of tariffs from January 2021.

“In which case, the discussion between the United Kingdom and the European Union on Brexit would be a matter for those two parties,” Fox commented.

The candidates have until early September to gain support among the WTO’s 164 member countries, with a view to a candidate being adopted by consensus.

All candidates emphasised the need for the WTO to regain political momentum following years of the WTO’s efforts to boost global trade being stymied by protectionism and obstructionism from China and the US, which is now likely to increase as a result of the global recession caused by the coronavirus pandemic.

There have been suggestions that the appointment of the new director-general should be delayed until after the US presidential elections in early November, but this was rejected by Jesus Seade, Mexico’s nominee for the WTO top job, who said on Wednesday the appointment should be made “as quickly as possible” because the WTO was in “deep crisis”.

One response to “UK WTO nominee plays down Brexit row”