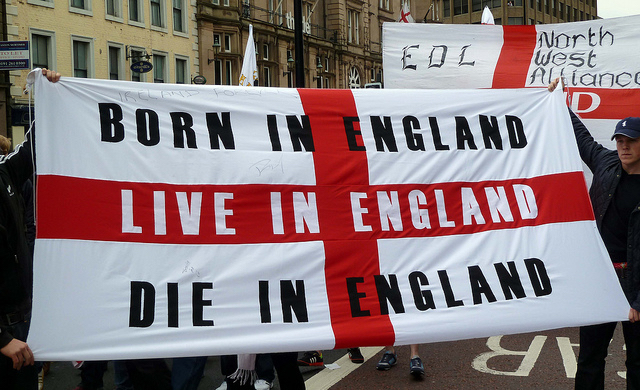 Sparsely attended far-right rallies in Britain highlight the decline of a movement in disarray, but experts say that some of its ideas have found new expression in the Eurosceptic UKIP ahead of elections in May.

Anti-fascist demonstrators outnumbered the roughly 400 people at a raucous English Defence League (EDL) rally in the northern city of Manchester in March, where speakers equated Islam with Nazism, terrorism and sexual slavery.

“Islam is not a religion of peace. It never was and it never will be,” said a speaker at the gathering, while another brandished a Koran to jeers of “Burn it!”.

Far-right groups such as the EDL and the British National Party (BNP) have imploded in recent years and even the German anti-Islamist movement Pegida’s first rally in Britain earlier this year was a flop.

Several of the relatively small groups have fallen victim to infighting, including former BNP leader Nick Griffin, who was expelled by his party last year after defeat in European Parliament elections in which he lost his own seat.

“One obvious explanation is the electoral system,” said Tim Bale, chair in politics at Queen Mary, University of London.

“Clearly it’s not favourable to small or extreme parties so any far-right parties have to overcome that obstacle,” he said.

Britain has no proportional representation, and its first-past-the-post system ensures that larger parties with national organisations have an advantage.

The BNP, Britain’s most electorally successful far-right group, had by the end of 2014 lost both its European Parliament seats and seen the number of its local councillors reduced to just two, from a 2009 peak of more than 50.

The decline of Britain’s far-right has coincided with a rise for the anti-EU UK Independence Party (UKIP) and some commentators see a clear link between the two trends.

“It’s not quite as simple as saying it’s a more respectable BNP,” said Steven Fielding, director of the Centre for British Politics at the University of Nottingham.

“But it has certainly picked up the votes that would otherwise have gone to the BNP or another fascist group, plus others, the extreme Eurosceptics,” he said.

The party, which is poised to come third in the election in percentage of the vote, has denied any far-right links but it is regularly embroiled in controversies over the views of prominent members.

It won its first two parliamentary seats last year with pledges to pull Britain from the European Union and dramatically reduce immigration.

Tim Bale, chair in politics at Queen Mary, University of London, said: “There’s the extreme right, and what we would call the populist radical right, which is slightly less nasty”.

“You could say that UKIP is populist radical right,” he said.

The anti-fascist watchdog Hope not Hate was more categorical about UKIP picking up support from the far right, saying it had “steamrollered through their previous heartlands and stolen their voters”.

UKIP says it is not racist and has banned former members of far-right groups from joining, although at least two prominent members who joined before the ban was introduced have been allowed to remain.

The party has punished members for conduct ranging from comparing Islam to cancer to calling for a popular black comedian to move to a “black country”.

A UKIP parliamentary candidate resigned last week citing “open racism” within the party, and accused it of engaging in “sectarian, racist filth”.

But at his campaign launch on Monday, Farage said: “The thing about UKIP is we have become the most eclectic, diverse political party.”

“I would imagine a lot of the far-right think they can go fishing in these waters under the guise that this is a semi-respectable topic everyone’s concerned about,” said Nick Lowles from Hope not Hate.

“The danger is the definition quickly gets blurred between Islamist, Islam, Muslim, whatever.”

A surge in Eurosceptism has firmly pushed the European Union up the political agenda in Britain.

The UK Independence Party's (UKIP) position on Europe is probably the clearest. They want the UK to leave the European Union as a first step towards regaining Britain's 'lost' national sovereignty.

>> Read our LinksDossier: Voting on Brexit: The issues shaping the UK election

>> Folllow our rolling coverage: Countdown to UK election: A vote on Europe?