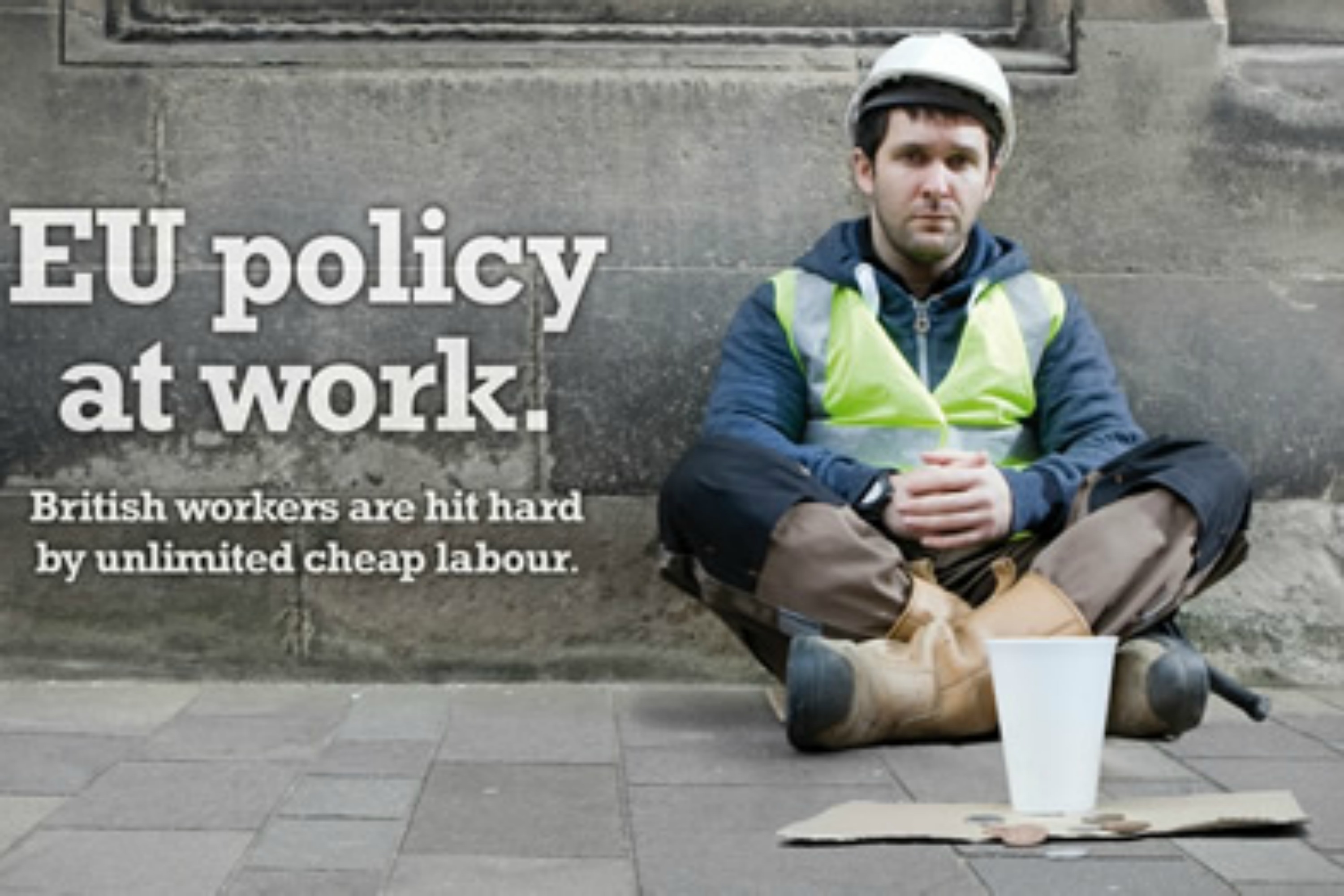 The anti-EU UK Independence Party (UKIP) has started its campaign for the EU elections with posters slammed by opponents as “racist”, fear-mongering and inaccurate.

One of the four posters depicts a construction worker sitting on a sidewalk and begging for money, accompanied by the text “EU policy at work – British workers are hit hard by unlimited cheap labour.”

Another poster states that “26 million people in Europe are looking for work – and whose job are they after?”

A third poster,  depicting a torn UK flag with an EU flag underneath, says “Who really runs this country? 76% of our laws are now made in Brussels”.

The fourth poster depicts passengers sitting inside a London bus, with the text “Your daily grind…”, continued onto another photo, on the right, with a gentleman sitting in the back seat of a limousine, with an EU flag, stating “…funds his celebrity lifestyle”. “The UK pays £55 million a day to the EU and its Eurocrats,” the message concludes.

According to the BBC, the poster campaign, which will be backed up by newspaper and online adverts, is the party’s biggest publicity drive to date. The campaign is reportedly funded directly by former Tory donor Paul Sykes.

UKIP leader Nigel Farage defended the posters, saying that they were “a hard-hitting reflection of reality as it is experienced by millions of British people struggling to earn a living outside the Westminster bubble”. According to opinion polls, UKIP may be the first force at the European elections, leaving Labour second and the Tories third.

Richard Corbett, a candidate for Labour MEP,  and former counsellor to Council President Herman van Rompuy, wrote in his blog that “not a single element” the UKIP narrative was true, “but it’s repeated ad nauseam in the eurosceptic parts of our media and by so many Conservative and UKIP  politicians that it’s almost taken as read”.

Line by line, Corbett refutes UKIP messaging. Regarding the claim that 75% of UK laws were made in Brussels, he quotes from The House of Commons library, which is independent of political influence, and which published a detailed analysis. The library concluded that the real figure was just 6.8% of laws and 14.1% of statutory instruments. These figures include everything that even mentions the EU, “from passing reference to explicit implementation”.

Regarding the claim that Britain was paying the EU millions, Corbett quotes the Confederation of British Industry (CBI), stating that UK membership in the EU benefits every family in the country to the tune of £3000 per year.

“Eurosceptics quote only what we pay into the EU’s own budget, most of which we get back anyway, and keep quiet about the far greater economic benefits, not to mention the intangible ones,” the Labour politician writes.

The UKIP posters were derided in social media for their incitement. The total number of unemployed people in the EU should not be assimilated to the number of potential immigrants to the UK, many argued.

A similar fear-mongering campaign recently proved to be unfounded. Prime Minister David Cameron has advocated slashing immigration, against the background of a campaign in the tabloid press warning that hordes of Bulgarians and Romanians would flock to the UK when Labour restrictions were lifted on 1 January 2014. Recent statistics show that very few Bulgarians and Romanians moved to the UK after 1 January .

The UKIP poster campaign was noticed also by the press in eastern Europe. Readers commenting on an article published by Dnevnik, the EURACTIV partner in Bulgaria, wonder why the anti-immigration campaign targets mainly eastern Europeans, and not immigrants from distant corners of the British Empire.