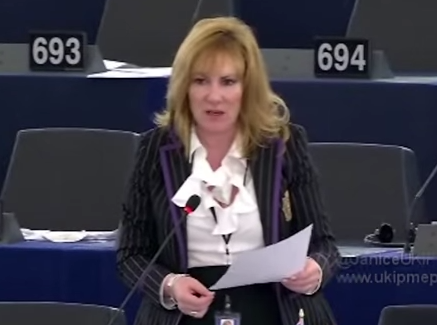 UKIP MEP Janice Atkinson in Strasbourg. She was suspended by her party last night amid claims of expenses fraud. [UKIP/YouTube]

Janice Atkinson was also stripped of the party whip by UKIP, which said it was “incredibly disappointed” with the South East England MEP. She was elected in last year’s European elections, which saw UKIP returned as the most successful British party.

Her chief of staff was filmed by an undercover reporter from The Sun newspaper allegedly accepting a bogus restaurant receipt for almost treble the correct amount.

It is claimed Christine Hewitt told the journalist, “The idea is we overcharge them slightly because that’s the way of repatriating [the money].”

Atkinson had hosted a cocktail reception, attended by UKIP leader Nigel Farage’s wife Kirsten, during the Eurosceptic party’s conference last month. The €1,314 drinks bash was paid for by Hewitt on a credit card.

24 hours later, according to The Sun, Britain’s best-selling newspaper, she returned. She allegedly asked the manager to give her a bill for €4,357 so she could claim a larger amount from the EU.

Both Atkinson and Hewitt were reported to the EU’s anti-fraud office OLAF, and Kent Police.

A UKIP spokesman said, “The party is incredibly disappointed with Ms Atkinson, who appears to have exercised extremely poor judgment in acting in a way that the party has never, and would never condone.

“The party has acted swiftly and immediately, and just as we showed when we suspended another MEP for financial irregularities, we always maintain a zero-tolerance attitude towards acts of this nature.”

Farage, a candidate for Thanet South and leader of the Europe of Freedom and Direct Democracy group in the European Parliament said, “If what she has been suspended for is right, I am astonished she could have done something quite so stupid.”

“It looks like a claim that wasn’t made, I am pleased to say, but a claim that was intended to be made that may not have been as genuine as perhaps it should have been,” he told The Telegraph.

Atkinson was slated to fight the nearby Folkestone and Hythe constituency in May’s elections, which have been dominated by immigration and the UK’s relationship with the EU.

UK Prime Minister David Cameron has promised a “Brexit” referendum if the Conservatives win the election and has called for reform on EU immigration rules. UKIP take a harder line on those issues, demanding the UK leave the EU and introduce an Australian-style points system for immigration.

Atkinson, one of UKIP’s highest profile politicians has hit the headlines for the wrong reasons before. She sparked a race row last year after she was recorded calling a UKIP-supporting Thai woman “a Ting Tong from somewhere”.

Ting Tong was the name of a Thai transsexual mail order bride played by comedian Matt Lucas in popular sketch show Little Britain. She offers sex in exchange for, among other things, residency in the UK. Ting Tong is also a Thai colloquial term for a mentally ill person.

In December, it emerged that Atkinson, UKIP’s welfare spokeswoman, owed more than €2,768 in child support to her ex-husband, despite previously criticising ‘feckless families’ who have more children than they can afford.

In January, she told the European Parliament in Strasbourg that MEPs “directly encouraged” the deaths of young Ukrainians by interfering in the Ukraine.

A surge in Eurosceptism has firmly pushed the European Union onto the political agenda in Britain. The ruling Conservatives have promised an in/out referendum on EU membership before the end of 2017 if they win the election, placing Europe's future at the centre of the debate.