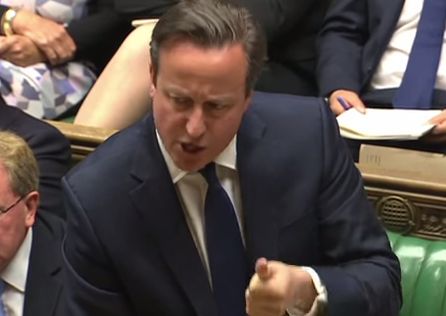 UK Prime Minister David Cameron today (10 June) agreed to allow Members of Parliament to vote on whether 16 and 17 year olds should be allowed to participate in the country’s in-out referendum on European Union membership.

After acting Labour leader Harriet Harman pointed out the age was lowered for Scotland’s UK independence vote, he conceded that the House of Commons could debate and vote on broadening the franchise.

Harman asked, “Why won’t he let 16 and 17 year olds vote? This is about the future of our country. They did in the Scottish referendum. It’s their future too.”

“I believe this house should vote on that issue. The Conservative manifesto is clear, and my position is clear. I think we should stick with the current franchise at 18 […] But the House of Commons can vote,” said Cameron.

Cameron’s concession over the voting age will be welcomed by the pro-EU Scottish National Party, as well as the opposition Labour party. There is a perception that younger voters are more likely to vote to stay in the bloc.

The SNP has 56 Westminster MPs, after its huge success in last May’s general election. It is also pushing for EU nationals living in the UK to be allowed to vote in the poll.

Citizens from EU countries, apart from Ireland, Malta and Cyprus, will not get a vote but today’s climb-down offers the possibility of increasing pressure to further expand the franchise.

But such a move would be opposed by Eurosceptic conservatives, who recognise that non-British EU citizens are likely to vote in favour of “in”.

British, Irish and Commonwealth citizens resident in the UK and UK nationals who have lived abroad for less than 15 years are eligible to vote.

Cameron won an unexpected majority in May’s election, paving the way to the referendum that he promised by 2017 if elected.

After the Conservative victory, Labour has switched its position to supporting the referendum – which Cameron couldn’t resist pointing out in Westminster.

The referendum law passed it first test in parliament on Tuesday by a resounding 544 votes to 53. Cameron thanked Labour for voting for the referendum bill. “After five years of opposing an EU referendum, to watch them all trooping through, it was the biggest mass conversion since that Chinese general baptised his troops with a hosepipe,” he said.

Labour has demanded Cameron give voters an independent analysis of the financial impact of a possible exit from the EU.

It said voters needed to be better informed before casting their ballot and that Cameron’s government should present analyses by the Bank of England and independent economic forecasters, the Office for Budget Responsibility, at least ten weeks before the vote is held. Last month, the Bank of England said it was planning to carry out such research.

“If there’s going to be something so significant as ‘Brexit’ then we do need […] an independent view, an independent study of the costs and impact on jobs and the country’s finances,” a Labour spokesman said.

Labour also called for a department-by-department analysis of the impact of a withdrawal on government responsibilities.

The proposals were put forward in amendments to legislation enabling the referendum to take place. That means Cameron, who commands a parliamentary majority, could try to block the amendments if he disagrees with them.

Cameron has pledged to reshape Britain’s ties with bloc before holding the referendum. It will be the UK’s first on the EU since 1975, 40 years ago last week.

He says his preference is to stay in a reformed EU, but has “ruled nothing out” if he fails to get what he wants.

Last weekend at the G7 summit in Bavaria, he warned his government ministers that they would have to resign if they wanted Britain to leave the EU – but later backtracked.

David Cameron's surprise victory in the United Kingdom’s general election has put Britain on course to hold a referendum on its membership of the European Union, and raises questions over Scotland’s future in the UK.

The Conservatives promised an in/out referendum on EU membership before the end of 2017 if they win the election, placing Europe's future at the centre of the debate.

Prime Minister David Cameron has said he would campaign for the UK to stay, but only if the EU was able to reform, saying “Britain’s national interest is best served in a flexible, adaptable and open European Union.”