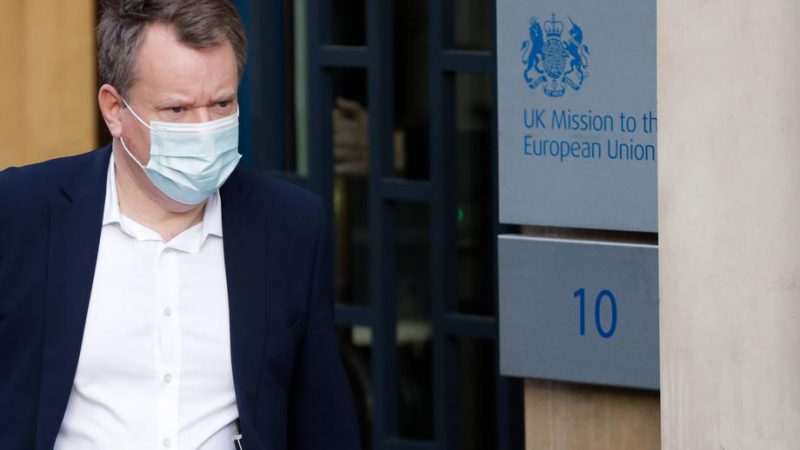 The European Commission and several member states have accused Johnson’s government of refusing to implement the protocol. [EPA-EFE/STEPHANIE LECOCQ]

The war of words between UK and EU officials is continuing ahead of a crunch meeting on the Northern Ireland Protocol, when Brexit Minister David Frost is due to meet European Commission Vice-President Maros Sefcovic in London.

The meeting set for Wednesday (9 June) is intended to assess what progress has been made following two months of technical talks aimed at simplifying the operation of the protocol.

Frost said at the weekend that the UK government had “underestimated the effect of the protocol on goods movements to NI”, and called on the European Commission to offer concessions.

However, on Monday, Gavin Barwell, chief of staff to former prime minister Theresa May, who initially negotiated the protocol, said that he was “pretty sure it’s not true”.

“They knew it was a bad deal but agreed it to get Brexit done, intending to wriggle out of it later,” Barwell added.

US President Joe Biden is expected to express his concerns about the impact of the dispute on the Northern Ireland peace process at the G7 summit to be hosted by UK Prime Minister Boris Johnson later this week.

The protocol, which introduced customs checks on goods travelling from Great Britain to Northern Ireland in order to avoid a hard border on the island of Ireland, was one of the most controversial sticking points throughout the negotiations on the UK’s withdrawal from and new trade relations with the EU.

Its implementation has prompted angry reactions from businesses and the Northern Irish Unionist community, which complains that it separates the province from the rest of the UK.

The European Commission and several member states have accused Johnson’s government of refusing to implement the protocol.

“The EU has been patient, but the EU’s patience is wearing thin,” an EU official told reporters on Monday. “To date the UK has not implemented the commitments that it took in December. The difficulty that we face is: how do you trust a partner in such circumstances?”

In March, the UK unilaterally extended the grace periods on customs checks on a range of products, prompting the Commission to begin legal proceedings for breaching the terms of the Withdrawal Agreement and EU–UK trade pact.

For their part, UK officials complain that the Commission has been too “rigid” in its interpretation of the protocol in light of the disruption it has caused to businesses and the political situation in Belfast, and say that despite tabling a series of proposals they have had nothing back in writing from the EU executive.

Last week, Frost said that the UK has offered an agreement, based on equivalence, and for an authorised trader scheme in a bid to reduce customs checks.

The Johnson government wants its domestic standards to be recognised as equivalent to the EU’s and has flatly rejected the idea of aligning to EU standards on food and agricultural produce.

However, UK officials have indicated that they have no intention of walking away from the talks and taking further unilateral measures but warned that the government “will consider all options available.”

London has also argued that the effects of the protocol were underestimated on both sides, pointing out that goods travelling to and from Northern Ireland account for 20% of total EU custom checks.

UK officials have also indicated that IT infrastructure intended to ensure that the Commission has access to customs data on goods leaving Britain will be ready by the end of June.