Britain's Prime Minister Theresa May and Labour leader Jeremy Corbyn arrive at Westminster before the state opening of Parliament, in London on 21 June 2017. [EPA/STRINGER / POOL UK OUT]

Denis MacShane was a Labour MP for 18 years and the minister for Europe under Tony Blair.

In Britain, Ireland and free trade divided political parties in the 19th century. In the last 50 years it has been Europe, Europe, Europe. And again the inability of the political class – specifically the Westminster MP/media elites – to ask let alone answer the question of Europe has now led to eight Labour and three Conservative MPs quitting their parties and saying they will sit an independent group in the Commons.

Brexit is not only the super glue that has rendered normal British government helpless and hapless for more than two years, it is simultaneously a powerful dissolvent that is bringing about the biggest change in British parliamentary history in a century.

Individual MPs have crossed the floor and there have been splits within parties, but this is the first time that a group of popular, media-friendly, high profile MPs from both main parties have decided to break free. 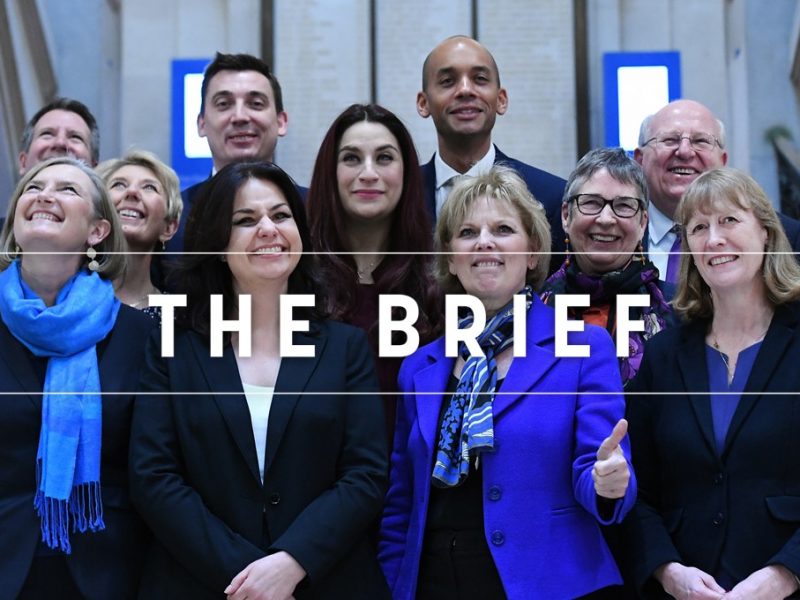 The question now is does it stop with the eight Labour and three Tory MPs? Or will there be movement by others who are fed up with the constant refusal of their leaders – Theresa May and Jeremy Corbyn – to do anything other than supinely acquiesce in treating the almost certainly fraudulent vote by just 37% of the British electorate to ‘leave’ the EU in June 2016 as a law from some God that cannot be challenged.

An opinion poll shows Labour slumping to just 26% following the announcement of the first seven Labour MPs to leave.

The enduring impression that Jeremy Corbyn is weak and evasive on handling anti-semitism among some Labour supporters combines with Labour’s weak and evasive policy of Brexit to do serious damage to the party.

How many other Labour MPs might move, especially those who want a future in a party that might win power and not inherit an economy broken as Japanese firms or Airbus or other foreign direct investment firms are forced to relocate to Europe because both May and Corbyn reject existing Customs Union and Single Market arrangements?

There are plenty of old, middle-aged and younger Tory male MPs who privately say they regard Brexit as a disaster and know that Mrs May’s deal amount to a recipe for a ‘Brexternity’ of difficult, bad-tempered negotiations with the EU27 stretching well into the 2020s.

Now they are put to shame by three women Conservative MPs, of unimpeachable Tory backgrounds, who have had the courage – one might say, in the demotic, the balls – to say it is ‘Time Up’ for a Conservative Party now dubbed ‘Bluekip’ or ‘Nukip’.

In the general election of 2017, UKIP and Nigel Farage won just 1.8% of the vote. It didn’t matter as UKIP had already penetrated the heart and body of the Conservative Party and taken much of it over.

The parliamentary arithmetic is unclear but Mrs May is close to losing her majority unless Labour MPs in favour of Brexit chose to repudiate Corbyn and the majority of their colleagues and vote to save Mrs May in the Commons votes that lie ahead.

For Jeremy Corbyn, it is all déja vu. He was elected in 1983 soon after the breakaway of Labour MPs into the Social Democratic Party rendered Labour unelectable for nearly two decades.

It was mainly the European issue that led to the creation in 1981 of the SDP – initially just four, not eight Labour MPs – who could not support the turn against Europe of Michael Foot and Tony Benn after Labour’s defeat in 1979.

There were other issues then like unilateral disarmament which lingers in the background today as Jeremy Corbyn and his No 2, John McDonnell, are not supporters of Britain’s nuclear deterrent. Today, it has been the atrocious handling of anti-semitism by the Labour leadership that has edged doughty campaigners against Jew-hate like Joan Ryan, Mike Gapes and Luciana Berger over the edge.

They and their Tory anti-Brexit new colleagues have been showered with hate and accusations of betrayal and disloyalty that would not have been out of place in a Stalin show trial in the 1930s.

But now many other pro-EU Tory and Labour MPs who face demands for their deselection by the two parties within a party – Momentum for Labour and the European Research Group  for Conservatives – may decide it is better to stay true to their principles and form a new parliamentary block in favour of Europe now than wait to be humiliated by local party activists who support Brexit?

Before long we will know whether this begins to fizzle out or whether this is the signal to Mrs May and Jeremy Corbyn that their closely aligned Brexit policy may be doing terminal damage to both their parties.

Might they now get off their knees? Every opinion poll shows the majority for Brexit in the summer of 2016 has evaporated.

Alternatives like revoking Article 50 for a lengthy period to reconsider Brexit are on the table.  So too is a new referendum.

May and Corbyn are now playing Russian roulette not just with the UK economy but their futures as party leaders able to hold or to win power. The bonds of loyalty to such kamikaze political leadership will dissolve as MPs realise that to follow May and Corbyn is to sign a political death warrant.

The resignations have accentuated the Brexit crisis. There is, as in 2017, the gambler’s throw of a general election but although Labour and the Tories can quickly find candidates to stand in the seats of the departing MPs it is doubtful if a new election would produce a Commons with a clear majority line on Brexit. Both Labour and the Tories would enter the election divided, at each other’s throats and demoralised.

The crisis of Brexit is taking British politics into uncharted waters.