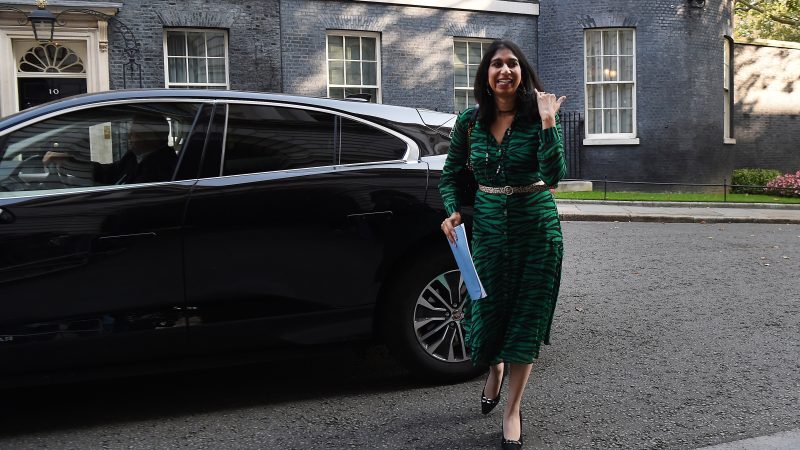 The UK government has been shamelessly using the Commission’s gaffe about Article 16 of the Ireland/Northern Ireland Protocol – which the Commission rapidly reversed – in its attempts to avoid the blame for post-Brexit problems and to lever additional concessions from Brussels, writes Dick Roche.

Normally an Attorney General would be expected to deliver a calm and measured view: not on this occasion.  The AG used the interview to double down on sabre-rattling by Prime Minister Johnson and colleagues to blame the problems being experienced in Northern Ireland on EU intransigence.

In Westminster empty shelves in Marks and Spencer’s Northern Ireland outlets, the suspension of mail-order services by Fortnum & Mason, difficulties being experienced by Northern Ireland steel importers, the cancellation of groupage transport,  even the problems for Lough Neagh eel fisheries selling their products through London’s Billingsgate market are the responsibility of Brussels – nothing to do with London.

Rather than a balanced analysis, the AG trotted out reheated political bluster: “Boris stood up to the EU last year and we got a good deal. I am really confident we are not going to let the EU push Northern Ireland around” was the message.

Demonstrating an extraordinary capacity to sidestep inconvenient facts, the AG overlooked the reality that the problems being experienced in Northern Ireland and across the UK arise from Mr Johnson’s “good deal”.

The fact that the UK itself decided that the transition period should end on 31 December 2021, come hell or high water or that the UK preparation for the new realities  that kicked in  on 1 January was poor were ignored.

Two parties signed the Withdrawal Agreement. In the case of the UK responsibility for the deal’s implementation or for any shortcomings in its negotiation lies with Westminster: there is no room for passing the buck.

At one point Boris Johnson recognised this. On assuming Conservative Party leadership, he said: “I will take personal responsibility for the change — The buck stops here.” That seems to be forgotten now.

There is no evidence in Ms Braverman’s interview or in pronouncements by either Mr Johnson or his colleagues of any willingness in Westminster to acknowledge its responsibility. Instead, the AG spoke of the Government being ready “to do everything that we can, whether that’s legislatively, or indeed if it comes to it, invoking Article 16… to ensure that there’s no barrier in the Irish Sea”.

In this, the AG was reiterating a threat made by Boris Johnson in the Commons on 13 January, well before the Commission’s Article 16 slip.

The suggestion that a protocol appended to an international treaty could be effectively scrapped a month after taking effect can most charitably be described as vacuous pandering.

In Northern Ireland, such pandering has consequences. The Chief Constable of the PSNI has warned about the “febrile” atmosphere that has developed.  Threats have forced the withdrawal of officials responsible for carrying out customs checks in Larne and  Belfast.

Ms Braverman who in addition to being the AG for England and Wales is the Advocate General for Northern Ireland should understand the potentially explosive impact of scrapping the Northern Ireland Protocol. So too should the Prime Minister and his Ministers.

The Protocol was put in place to protect the hard-won peace that was brought to Ireland by the Good Friday Agreement. It avoids a hard border on the island of Ireland.  Internationally it is a unique arrangement.

Its application means that there are some checks on goods moving from Great Britain into Northern Ireland.  These arrangements trigger sensitivities within the Unionist Community that should neither be brushed aside nor inflamed.

Unionist politicians who advocate scrapping the Protocol can plead justification on the basis that they were not in the negotiations that produced it. They can also point to assurances given by Mr Johnson in 2019 that, post-Brexit, nothing would change, there would be “no barriers of any kind” to trade crossing the Irish Sea and that businesses could “bin” any customs forms.

British Ministers can claim no such absolution.

Problems with the UK follow through on its commitments in the Withdrawal Agreement are itemised in his letter of 10 February to Michael Gove by Commissioner Šefčovič.

The letter itemises a list of shortcomings ranging from non-operational control posts to the refusal by the UK to comply with an arrangement agreed on 17 December 2020 allowing the EU access to its import clearance system. The letter calls London’s bluff.

The EU Commission has committed to finding “swift solutions” to the difficulties in Northern Ireland. Ireland’s Foreign Minister, Simon Coveney has indicated that the Irish Government is open to support extensions to the ‘grace periods’ allowed in the Protocol.

The Irish Taoiseach has indicated a willingness to work with the Commission to see if some fine-tuning of the Protocol can be agreed and has called on all sides to ‘dial down’ the rhetoric. These are positive reactions.

In addition to seeking to iron out the difficulties that have arisen for Northern Ireland with Brexit, it would be beneficial if political leaders in London and Belfast, with encouragement from Brussels and Dublin, turned their attention to the unique advantages that the Protocol offers Northern Ireland, a matter on which all have been strangely silent.

During the 2019 UK General Election a young Conservative and Unionist candidate for North Down, Matthew Robinson, pointed out that the withdrawal arrangements, while challenging, presented a potential “win-win scenario  in which (Northern Ireland had) one foot in the European Market (and) one foot in the UK market.”

Robinson saw this as a potential key to unlocking the Northern Irish economy. If British political leaders were to take this advice instead of using Ulster as a political football real progress could be made.

Political stunts, temper tantrums and threats to engage ‘nuclear options’ will not resolve the problems triggered by Brexit in Northern Ireland – which voted solidly to remain in the EU. What is needed is continuing political engagement, including more direct engagement with the parties in Northern Ireland.