Peace in Northern Ireland needs the EU now more than ever 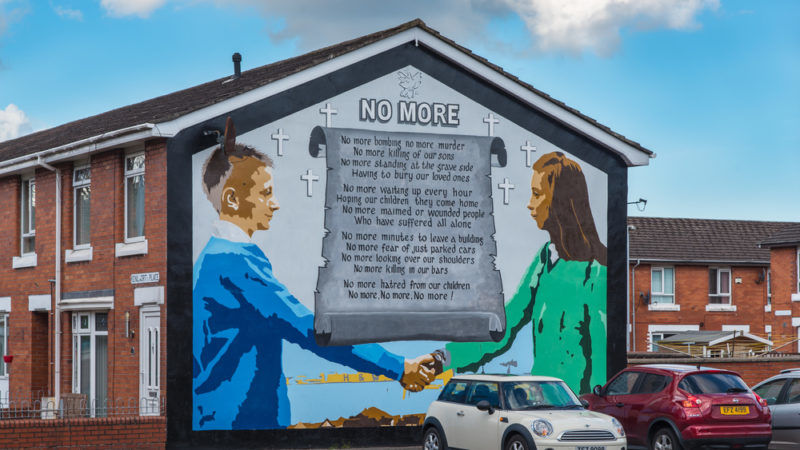 Brexit will badly impact Northern Ireland. Being cut off from the EU will rob it of its main stability guarantee, writes Daniela Irrera.

Daniela Irrera is associate professor of international relations at the University of Catania, Italy and president of the European Peace Research Association (EuPRA).

But the risk is not only in dealing with the potential future unification of the two parts of the islands. The EU backed defusing the conflict and transformed its negative potential into something positive by promoting sustainable communal changes.

Among the many effects of Brexit, the Northern Irish issue is gaining increasing interest. The main question is whether this will constitute a persuasive argument for a future referendum, paradoxically contributing to the unification of the island, in the long term.

In an article published in the European Union Review, in 2008 – following extensive fieldwork in the Republic and in Northern Ireland – I maintained that the EU significantly contributed to the signing of the Good Friday Agreement by creating the conditions thanks to which all the parties would turn to a sustainable compromise.

I also admitted that the EU contribution was not unanimously agreed and shadowed by the more visible US role.

After Brexit, the role played by the EU in the conflict will stand out as vivid and actual as it has been, and will be valued again as determinant as it has been. Rather than getting involved in the peace talks, the EU subsidised the conflict by transforming its negative potential and promoting sustainable communal changes. This occurred through three major processes.

First, the EU operated to strengthen the North-South dimension. What made the conflict a very complicated one over the years was the presence of a variety of actors, not only Catholics and Protestants (and among them, moderates and extremists) but also the Republic of Ireland and UK as internal parts.

The need to promote wide and inclusive dialogue drove the efforts of all external actors, including the US. In particular, the EU chose to invest into improving the relations between the two parts of the island.

The integration played its role through specific bodies, such as the special EU Programmes Body (SEUPB), which contributed to identifying the policy areas in which communities in the North and South of Ireland have interests and needs in common.

Second and consequently, the EU shaped the identity of the local parties on both sides of the conflict. The wider debate about the EU’s involvement and the increasing commitment of all major parties in the European Parliament favoured the gradual change of the party discourse from the original fear of integration as a perturbation of internal affairs towards the opportunity for change.

Therefore, the EU contributed not only to change the patterns of communication within parties about the conflict but also provided new arguments facilitating agreement and peace that all communities shared.

Last, the EU invested considerably, also in economic terms, in a sustainable peace settlement. The perspective of a power-sharing agreement as the only way to transform the conflict was corroborated with a massive financial investment, through structural funds and the provision of special funds, directed to Northern Ireland, including an international fund, shared with Canada and the US.

Such an approach was driven by the assumption that economic prosperity could reinforce social dialogue and convince both communities that peace is much more convenient. Although nothing new if one considers that the EU aims at being considered as a peace provider, but this was the initial attempt made towards a conflict that was still perceived as internal and old-fashioned.

I believe that it is not an overestimation to affirm that the EU made the difference in the Northern Irish conflict. Surely, the effects of the integration process and the investments into the perspective of peace, which have been perceived many years after the agreement, were substantive and remarkable.

The US action was immediate and tangible, but the EU acted as a guarantee of the convenience of choosing peace. Thus, it is not just the risk of unifying the island which should concern the policy-makers, the observers and the citizens, but more importantly, the fact that far from the EU, Northern Ireland would lose its compliant and comfortable environment.

More than Scotland and Wales, Northern Ireland would severely regret having underestimated the EU in due time.