Pro-Europeans in the UK have cause for optimism 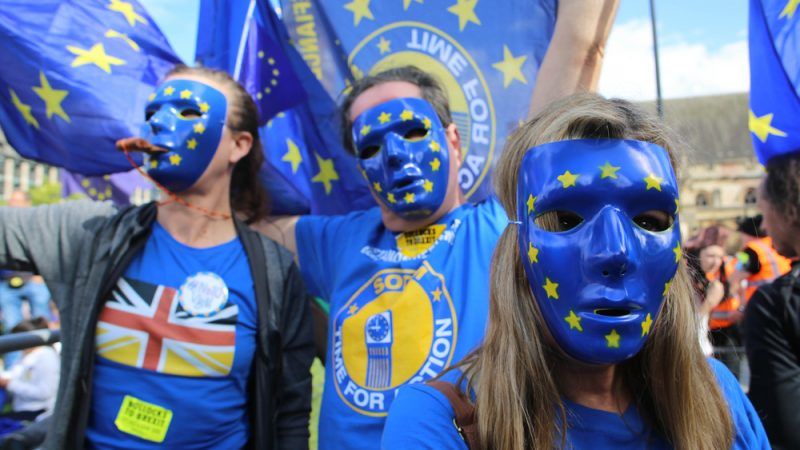 If Brits change their mind, the EU will let them stay. [lonndubh/Shutterstock]

2018 will be the most important year for the Brexit process. With just over a year to go until the UK formally leaves the EU, there is still all to play for, where pro-Europeans in the UK like Open Britain can take courage from recent political and economic events.

Over the past 18 months, since the EU referendum vote, some key domestic developments have taken place: primarily, the UK government has lost its majority in the House of Commons and new facts, which could not have been predicted prior to the referendum, have begun to emerge. On this second point, this has included, for example, slowing economic growth due to Brexit-related uncertainty, where the UK is now one of the EU’s slowest growing economies. There has also been a drop in applications from nationals of the remaining EU member states to work as nurses in the UK’s National Health Service, and the value of the UK’s currency, the Pound Sterling, has dropped on the international financial markets, where it currently trades at around €1.12. With the eurozone far and away the UK’s largest trading partner, this has made imports from the rest of the EU more expensive and has made foreign travel for UK citizens to other EU member states less enticing.

None of these “new facts” are points which anybody in the UK should be happy about. However, they do point to a worsening trajectory of the UK’s fortunes since the Brexit vote, despite claims by leading cheerleaders of the Vote Leave campaign during the referendum that Brexit would see the UK become a land of milk and honey.

The logical question from this for all pro-Europeans in the UK then becomes, what happens if the positive future promised by those advocating for Brexit does not become reality? How should we proceed? The answer is simple.

If the path chosen by the government is not one with which the British people are ultimately happy, then they have every right to stop and reconsider. In November last year, Open Britain hosted an event with Lord John Kerr, one of the authors of the Article 50, where he clearly underlined that the UK’s notification of its willingness to leave the European Union under Article 50 could be withdrawn at any time prior to March 2019. Furthermore, as we have heard from European leaders ranging from Emmanuel Macron to Donald Tusk to Guy Verhofstadt, if the UK were to change its mind, the door to staying in the EU would remain open. Keeping an open mind on this process is important, where the UK’s Brexit secretary himself once famously said that a democracy which cannot change its mind, ceases to be a democracy.

Indeed, as the Brexit negotiations have unfolded, irreconcilable contradictions in the UK Government’s negotiation stances have become ever clearer – wanting to leave the internal market and the customs union but maintaining a fluid border with the Republic of Ireland; wanting to roll over existing EU trade deals with third countries whilst being oblivious to the fact that there is no guarantee that third countries will agree to this; wanting to stay inside EU executive agencies such as the European Medicines Agency (now leaving London for Amsterdam) whilst being outside of the jurisdiction of the European Court of Justice.

As these contradictions become ever clearer, throughout 2018, the having-cake-and-eating-it approach taken by the British government will slowly come up against the hard reality of international Realpolitik. In the coming months, if, as is likely, promises by Brexit advocates in the 2016 referendum become less and less deliverable and the UK’s future becomes less and less certain, everybody in the United Kingdom should reserve the right to reconsider the approach which has been taken. In 2016 nobody in the UK voted to see themselves worse-off and, if the British people change their minds, then Brexit will indeed be reversible.

Crucially, it is this year, of all years, where Pro-Europeans in the UK should continue to make their voices heard – they have every cause for optimism.