The Brief – Part of the Union 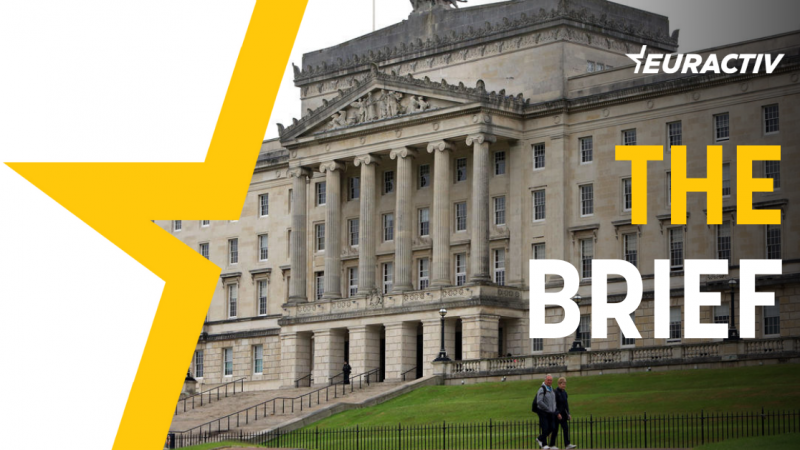 A political stunt it may have been, but Paul Givan’s decision to resign as Northern Ireland’s First Minister over the Northern Ireland protocol still looks like an effective tactic.

Givan resigned on Thursday, stating that the protocol – which had required a good deal of political brinkmanship to reach – was challenging the terms of the 1998 Good Friday peace agreement, as well as Northern Ireland’s status in the United Kingdom.

The day before, Agriculture Minister Edwin Poots – also a member of the pro-British Democratic Unionist Party (DUP) – moved unilaterally to halt border checks on goods arriving from Britain. There is anecdotal evidence that his orders are not being followed by a sizeable number of customs officials.

Under the complicated power sharing arrangement set out in the Good Friday Agreement, the top two parties from the pro-British and pro-Irish communities must share the First Minister and Deputy First Minister posts.

With Givan gone and the DUP refusing to name a successor, his decision means that Deputy First Minister Michelle O’Neill, of Sinn Féin, loses her job as well – though other ministers can remain in post.

Since the executive and Northern Ireland assembly were due to go into purdah in early March ahead of elections in May, it would be logical to bring forward the polls by a few weeks. But Northern Irish politics often follows the heart rather than the mind.

The European Commission says that Poots’ move amounts to a breach of the UK’s Brexit deal, though it has refrained from beginning legal action.

The UK government, meanwhile, says the decision is a matter for the Belfast executive, though the DUP’s brinksmanship helps make London’s argument that the protocol has upset political stability in Northern Ireland.

If anything, the DUP’s moves could well focus minds in London and Brussels. European Commission Vice President Maroš Šefčovič and UK Foreign Minister Liz Truss have set an unofficial end of February deadline to reach an agreement on the protocol.

Despite the DUP’s rhetoric that the protocol must be scrapped, itself an election campaign ploy, there is room for the main unionist parties to agree on a compromise.

Besides, the bulk of the business community in Northern Ireland accepts that the protocol will stay in one form or another. Many of them, particularly exporters, want to take advantage of having better access to the EU single market than British firms.

An agreement between the EU and London might also solve the political crisis in Northern Ireland.

Sinn Féin, which supports a united Ireland, is very likely to win May’s elections for the first time. With 25%, they have an eight point lead over the DUP.

But Sinn Féin supports the protocol, and the DUP has threatened not to sit in a new executive. Should the DUP make good on that threat, it would pile huge pressure on the DUP’s more moderate rival, the Ulster Unionist Party, to also boycott a new government.

The DUP believe, correctly, that they were sold out by Boris Johnson’s government when the protocol was agreed. The party has now played its two trump cards in successive days. The results remain to be seen.

Today’s edition is powered by Europe 2022.

Europe 2022 Conference – “Towards A Competitive Europe”

Germany’s leading media Der Tagesspiegel, DIE ZEIT, Handelsblatt, WirtschaftsWoche together with EURACTIV invite you to the conference from 7 – 9 Feb, 2022. With speakers from across Europe, we will address challenges that will follow the end of the pandemic. Join us!

Russia and China called in a joint statement on Friday for NATO to halt its expansion while Moscow said it fully supported Beijing’s stance on Taiwan and opposed Taiwanese independence in any form.

The European Commission plans to set an EU-wide binding 50% pesticide reduction target by 2030 but leave member states free to set their own national targets, according to a leaked proposal to revise the EU’s pesticide framework obtained by EURACTIV.

Plans to reduce pesticides can only succeed if farmers have access to alternatives – including so-called new genetic engineering, Norbert Lins, chairman of the EU Parliament’s Agriculture Committee, told EURACTIV Germany in an interview.

Little progress was made in the second political trilogue on the Digital Markets Act on Thursday, but a breakthrough might soon be found by linking the negotiations with the Digital Services Act.

The UK’s Competition and Markets Authority (CMA) has fined Meta £1.5 million for failing to give the watchdog advance warning of the departure of high-level staff, something it had agreed to do under the terms of an earlier order related to its acquisition of Giphy.

In France, telecom operators presented a list of 15 recommendations to candidates in the presidential race on Thursday, including the proposal for major digital content providers to contribute to the “costs of networks to ensure their economic and environmental sustainability”.

In an interview with EURACTIV France, Pascal Canfin – chairman of the European Parliament’s Committee on the Environment, Public Health and Food Safety – spoke about the EU Parliament’s proposals to improve the battery regulation and actions to accelerate the transition towards full electric mobility in the EU.

With only a fraction of EU-bound containers controlled for counterfeits, a large majority of counterfeited products are guaranteed to find their way to European buyers.

Low-fare airlines have called on EU lawmakers to scrap the exemption which allows European long-haul carriers to avoid paying for carbon emissions on flights outside of Europe.

The views are the author’s.