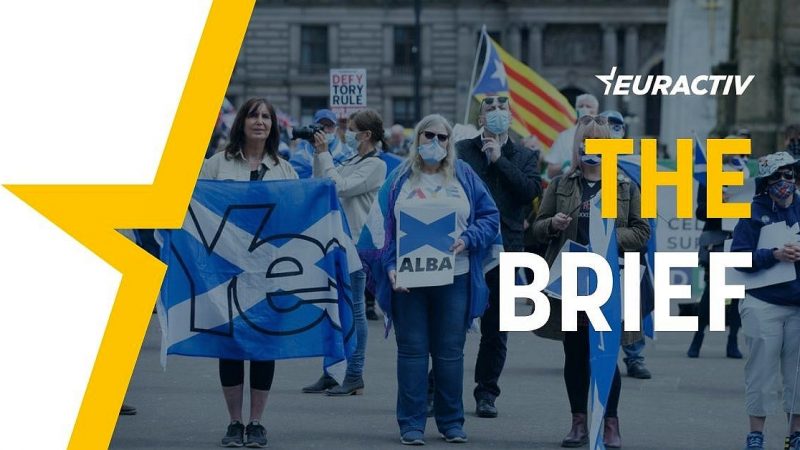 Theatre director Thomas Bellinck’s dystopian vision ‘The House of European History in Exile’, a museum exhibition in Brussels in 2013, when Brexit itself looked improbable, predicted that an independent Scotland would be the last country to join the EU.

His exhibition forecast that the UK would leave the EU, resulting in Scotland joining the EU in 2017. The EU itself would then collapse a year later. At the time, it looked like a triumph of wild artistic licence over logic.

The SNP’s internal rows between First Minister Nicola Sturgeon and her predecessor Alex Salmond have damaged the party and public demands for independence. For most of the last five years, opinion polls have shown a narrow majority in favour of Scottish independence.

There is currently a near dead heat. After nearly 14 years in government in Edinburgh, the SNP is starting to fray, and its record on a range of policies, including health and education, is facing growing criticism.

Even so, the SNP enjoys political advantages that others can only dream of.

By suspending normal politics, and giving prime ministers and government ministers even more coverage than usual, the COVID-19 pandemic has, by and large, been good for incumbents.

Months after being castigated for having presided over the highest COVID death toll in Europe, Boris Johnson has now been rewarded for the UK’s speedy vaccination programme with a ten-point poll boost. His Conservative party will perform well in most of Thursday’s polls in Scotland, Wales and local councils, though not, as ever, in Remain capital London.

In Scotland, the incumbency advantage is even more pronounced. Since health and social policy is a devolved competence, the SNP have been able to make these polls a referendum on Sturgeon, who is widely thought to have performed well throughout the pandemic.

However, they also get the double advantage of being in opposition to Johnson’s Conservative government in Westminster. Though the Scottish Conservatives are polling in second place, just above the Labour party, they still command only around 20% of the vote and Johnson remains deeply unpopular in Scotland.

Labour and the Liberal Democrats both oppose Scottish independence, meaning that the 50% of Scots who back sovereignty have only one party to vote for.

Johnson insists that he will not allow another Scottish independence referendum. In truth, should the SNP win by the landslide that is expected on Thursday, it will be nigh on impossible for him to justify denying another plebiscite. Should they get it, the SNP will never have a better chance to win the ultimate prize.

On May 3, 2021, the annual observance of World Press Freedom Day, the One Free Press Coalition launched the monthly list of “10 Most Urgent” press freedom cases around the world. This iteration focuses on journalists writing about human rights—an especially dangerous beat. Of journalists imprisoned in 2020, 55% covered human rights, and 306 journalists reporting on human rights have been killed since 1992.

Wastewater surveillance can be used to track the spread of new variants of the coronavirus among Europe’s population, the EU’s Environment Commissioner Virginijus Sinkevičius told EURACTIV.

The future of rail transport may lie in digitalisation and automation, but workers needn’t worry about being replaced by machines, according to EU employment Commissioner Nicolas Schmit. However, employees will need to become more tech-savvy to meet the rail demands of tomorrow, the Commissioner qualified.

According to OECD projections, by 2030, the “Blue Economy” could outperform the growth of the global economy as a whole, both in terms of value added and employment.

One response to “The Brief, powered by GIE – The 28th state?”