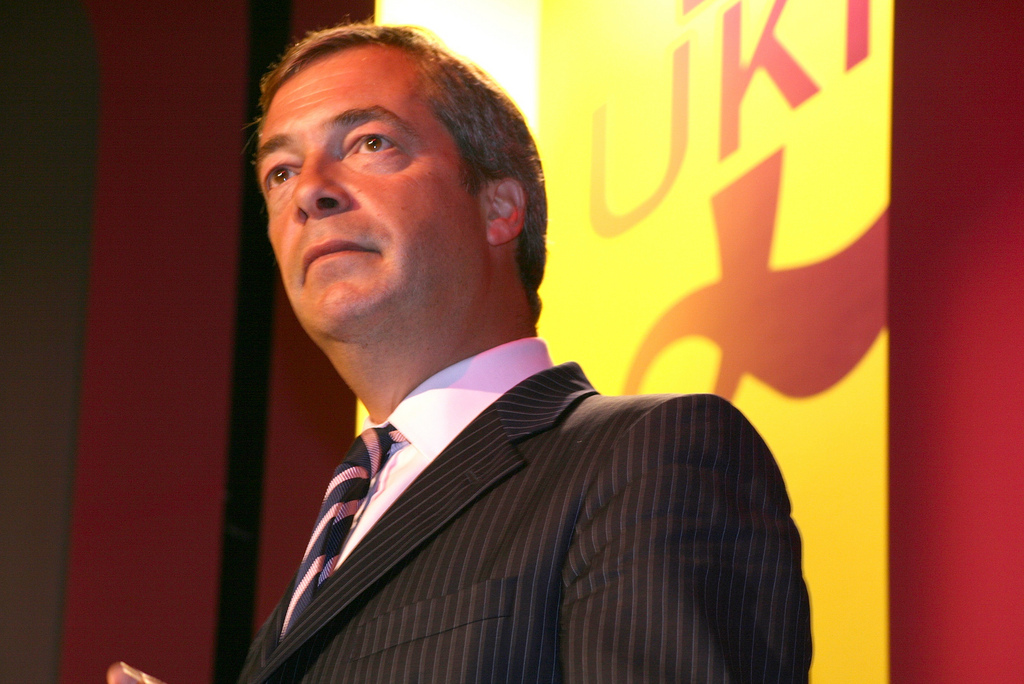 Proponents of leaving the EU, like Nigel Farage, would be dooming the country to perpetual isolation when globalism reasserts itself. [Euro Realist Newsletter/Flickr]

Recent global events attest to impending political isolationism. Donald Trump would build walls and restrict Muslim immigration. British isolationists will vote to separate the UK from the EU, while their Scottish counterparts would vote leave what would be left of Britain, writes Leon Trakman

Leon Trakman is a professor of law and former dean at the University of New South Wales in Sydney and is a specialist on international commercial and investment law.

Why such retreats from a world dominated by globalisation, free trade and yes, political and economic progress? Why have we returned to localised feudalism that preceded even the sovereignty of the 16th century nation state, guaranteed by the Treaty of Westphalia in 1648?

The answers to these questions transcend mistrust of global and mega-regional institutions such as the European Union and the flailing Transatlantic Trade and Investment Partnership which includes the US and the EU. At issue is also more than a retreat to state sovereignty, and distaste for abrogating the powers of nation states. The core problem relates to economic opportunism redressed as political self-determinism, which masks overriding reversions to localised feudalism.

Take Britain’s impending divestiture from the EU. Why are British subjects retreating from an economic union that was historically profitable and, arguably, will be profitable in the future? Why do contrarians argue that Britain would be better off outside the EU? Why will Britain be eternally dammed as a breadbasket for EU subjects who might be underemployed elsewhere?

Yes, there are statistics that support these rationalisations for Brexit, at least at present. However, there are stark indications that challenge these contrarians. Britain does not have millions of refugees seeking to gain entry, as Germany is currently experiencing. Britain does not have to compete to sell its goods and services into high tariff EU markets. British subjects do not have to displace migrant labourers from Eastern and Southern Europe who are employed in the predominantly lowest paid echelons of the British economy. Britain does not have to build hundreds of new prisons for the incarceration of migrant workers who are not a geometric source of new criminality, rhetoric notwithstanding.

Contrarian alarmism in Britain is ideologically jaundiced, not by only re-incantations of state sovereignty, but from the perceptible retreat into pre-nation state feudalism. Such reversions to feudalism are indelibly imprinted in recent proclamations by corporate elites that the UK would prosper economically and politically by leaving the EU, and that it could form a richer assortment of foreign trade and investment partnerships. The reality is that such proclamations undoubtedly support those who propose such bold moves, at least in the short term, without demonstrably promoting the common good.

However, the problem with EU contrarians is more deeply imbedded, transcending economic opportunism. Cultural isolationists warn of the distillation of the British persona in the face of cultural dilution from intruder cultures, despite British social historians challenging a lineage of geographic and cultural isolationism.

Somewhat differently, social contrarians warn of the loss of a distinctive British identity which is significantly mythological, given decades of social integration within a stratified British Empire, well before the EU was ever contemplated.

Contrarians who challenge economic regionalism, beyond the private order of economic and political barons, overstate their case for insulating Britain from the EU. They underplay the extent to which economic regionalism is the means of resourcing regional markets through economically efficient transactions between and among contiguous nation states.

The stark reality is that, despite the rhetoric of Britain’s feudal barons of commerce, Britain is unlikely to transition comfortably, either economically or politically, out of an EU free trade zone into a self-sustaining international market centre.

The EU is most unlikely to throw the departing UK a lifeline, including preferential tariffs and trade benefits. Excluding reservoirs of productive migrant workers from Britain will assuredly create a void in employment markets that is currently filled by eager and generally low-paid EU workers seeking a better life for themselves and contributing to greater domestic productivity.

Fanciful dreams of a sovereign Britain standing proud and tall, free from EU imposts and directives is trite and, ultimately, self-defeating. Nation states have repeatedly surrendered their domestic sovereignty on self-interested grounds from the very inception of the 16th century and ever since then.

Tony Blair in 1999 proclaimed that Westphalian sovereignty was an historical aberration contrary to the “doctrine of the international community”. The Westphalian sovereignty of the modern state is more profoundly a source of rivalry and dissention among states than it is a medium of harmonious coexistence. It is also pretentious to present a global community of equally sovereign nation states in the face of massive disparities in their economic and political powers, accentuated by internal, not only external, cultural and social diversity.

Far from becoming more sovereign politically economically or socially, Britain outside the EU is likely to become even more fractured, disharmonious and disembowelled. Those who secure short term gain from a diffusely motivated feudal isolationism within Britain will beguile others into believing in the fantasy of a brave new domestic order that trammels rather than promotes a transcendent communal good.

They will fail to recognise that, in the longer term, globalism will reassert itself, and that those states that retreat from globalism are likely to isolate themselves irretrievably from it.

One response to “Leaving the EU: moving forward into isolation”