Pressure is increasing on member states to recycle 77% of plastic bottles by 2025 and reduce waste.
News

Stadiums are a great environment in which to trial sustainability measures because of the number of people who regularly attend sporting and entertainment events, according to those involved in their day-to-day running.
News

The European Commission unveiled its new circular economy action plan on Wednesday (11 March), confirming the EU’s intention of halving municipal waste by 2030, and suggesting to offer consumers a new “right to repair” for computers and smartphones.
Interview

The announced EU food policy should also strive to create future prosperity for businesses in good harmony with the environment, not only to take policies against some parts of the food value chain, Nestlé Europe chief Marco Settembri told EURACTIV.com in an interview.
Opinion

The French National Assembly has voted to ban all disposable plastics by... 2040, which would be far too late for many environmental advocates. EURACTIV France reports.
News

A deposit-return scheme not yet launched in France is already being strongly criticised by local authorities and recyclers, who consider it ineffective and regret not having been sufficiently consulted about it. EURACTIV's partner le Journal de l'Environnement reports.
News

While the global production of plastics is increasing, it is slowing down in Europe, according to PlasticsEurope, the leading pan-European association of plastics manufacturers. EURACTIV's partner le Journal de l'environnement reports.
News

Plastics recycling is as much of a challenge as an opportunity for the circular economy. Michael Laermann looks at chemical recycling and whether it can make the plastics value chain more circular whilst providing a profitable new industry branch.
Special ReportNews

In the coming years, EU citizens are set to see a change in the way they recycle waste at their homes and businesses – and in the way that recycling is measured.
Special ReportInterview

When it comes to meeting the EU’s new recycling targets, metals will have a big head start. But EU member states could find it harder to reach future objectives under a new methodology being considered at the European Commission, says Maja Desgrées du Loû.
News

The European Commission has set an EU-wide objective for all packaging to be recyclable or reusable by 2030. But crisp packets are a particular headache for policymakers and the recycling industry because they are so tiny and lightweight.
Opinion 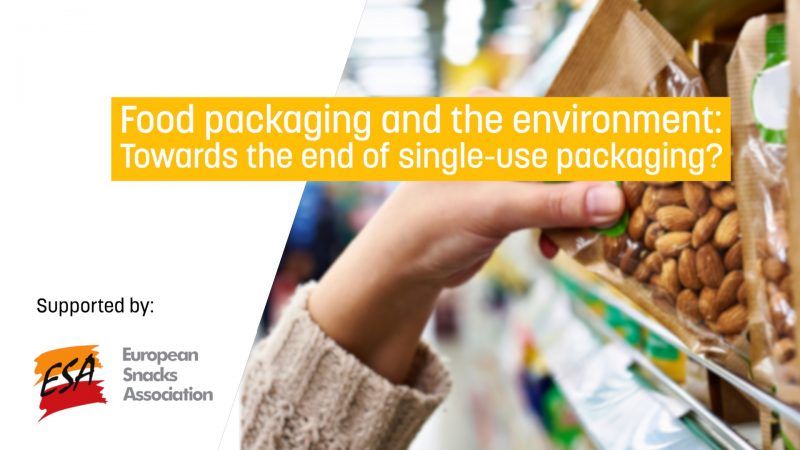 Food packaging and the environment: Towards the end of single-use packaging?

Plastic plays a significant role in food packaging as: it serves to meet product safety and quality requirements. However, some types of packaging remain difficult to recycle for a number of technological and practical reasons and are prone to littering.
Special ReportOpinionPromoted content

To prevent littering and foster more recycling, some member states are considering setting mandatory deposit-return schemes (DRS) on single-use beverage packaging. For plastic packaging, there are reasons to believe this could happen. But if a DRS on single-use plastic packaging is introduced, would it also include other materials?
Special ReportNews

It is easy to rank EU member states by how proficient they are at recycling but the details behind the statistics are more complex. Scratch beneath the surface and there is a quasi-philosophical issue lying in wait.
Read more »»
RSS - Food packaging