The amount of aid matters, but so does how and where it is spent. Development aid must  be focused on reducing the inequality that drives poverty, writes Julie Seghers.
Opinion

A window of opportunity has opened for European policy since growth rates rebounded. But whether growth will continue for a time long enough for reducing the fiscal burden, unemployment and inequality depends on strategy changes, write Karl Aiginger and Heinz Handler.
Opinion

There has been a significant mood change among European policymakers. Far from seeing Africa as a charity case, they have come to recognise it as a security threat: doing more to develop Africa's ailing economies is rising fast up the EU agenda, writes Giles Merritt.
News

The UK has pledged to double the funding it gives to fighting neglected tropical diseases, in a move that will protect more than 200 million people around the world from debilitating and painful conditions.
News

Faced with what promises to be a long-term migration crisis, more and more donor countries are using their development budgets to fund their domestic asylum policies, a trend that is set to become increasingly the norm. EURACTIV France reports.
News

Britain is not doing enough to help northern Nigeria, where millions of people have had their lives ruined by the Islamic militant group Boko Haram, according to a report by the UK parliament.
News

Campaigning groups have blamed ‘accounting loopholes’ behind an apparent increase in global development aid, saying much of the extra money ended up being spent at home by rich countries.
Opinion

Ethiopia is being hit hard by one the most severe El Niño phenomenon on record. Numbers speak for themselves – in the past year, the number of food insecure people has increased from 2.9 million to over 10 million at present, write Neven Mimica and Christos Stylianides.
Opinion

These are challenging times for policy makers, as global security risks become ever more complex. The tragic events of 2015 show how the challenges of poverty and development need to be tackled together, write James Mackie and Rhys Williams.
News

European donors have been accused of profiting from their aid budgets, as an increasing amount of their money for the world's poorest countries is being given as loans – which have to be paid back with interest.
Special ReportNews 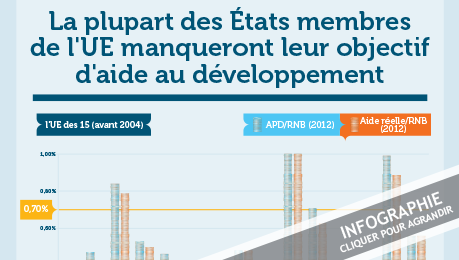 In 2005, EU ministers pledged to spend 0.7% of member states' Gross National Incomes on overseas development aid by 2015, keeping in line with the UN Millennium Development Goals. But new analysis of the latest figures shows that when genuinely new aid is counted, EU states are barely meeting half of that commitment. Fifteen months remain to change the picture.
News
Development Policy 04-04-2013

Brussels has called on member states to honour their aid commitments as their contributions to the world’s poorest countries fell by €2.3 billion in 2012, according to an Organisation for Economic Cooperation and Development (OECD) report published yesterday (3 April).
Opinion
Development Policy 28-02-2013

Spain's aid budget may be contracting sharply, but with greater craft and focus it can demonstrate that money isn't everything, writes Jonathan Glennie.
Interview
Development Policy 18-02-2013

EU leaders applied a short-term approach to a long-term budget. But it is never too late for them to get back on the right track, Oxfam's Nicolas Mombrial told EURACTIV Germany.
RSS - aid budget