At the very start of Bulgaria's EU presidency, Prime Minister Boyko Borissov’s ruling coalition was unexpectedly shaken by growing opposition to the government's plan to ratify the Council of Europe convention on preventing and combating violence against women and domestic violence.
News

Bulgarians will vote on 26 March in snap general elections. Euractiv explains the elections with the help of one of the leaders who hopes his party will be able to pass the 4% threshold and win MP seats in the 240-member National Assembly.
VideoPromoted content 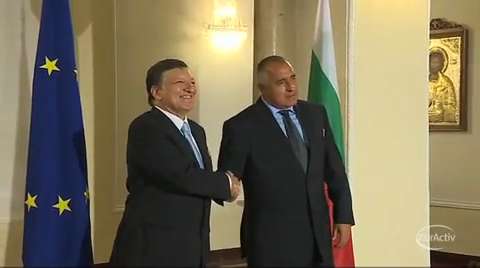 Following a rocky election that has left Bulgaria facing a potential political stalemate, the European Commission on Monday warned that it wants clarity over reported allegations of election fraud. Only hours before election day, the Bulgarian authorities found 350.000 illegally printed ballots in a printing house near Sofia. The business was owned by an activist of the center- right party GERB. The seizure quickly prompted complaints by the opposition socialist party.
News

Bulgarians voted on Sunday (12 May) to send four parties to the 240-seat parliament, but with preliminary results showing a horse race between the two leading political blocs, analysts doubted that the party of former Prime Minister Boyko Borissov stood little chance of forming a government.
RSS - BSP