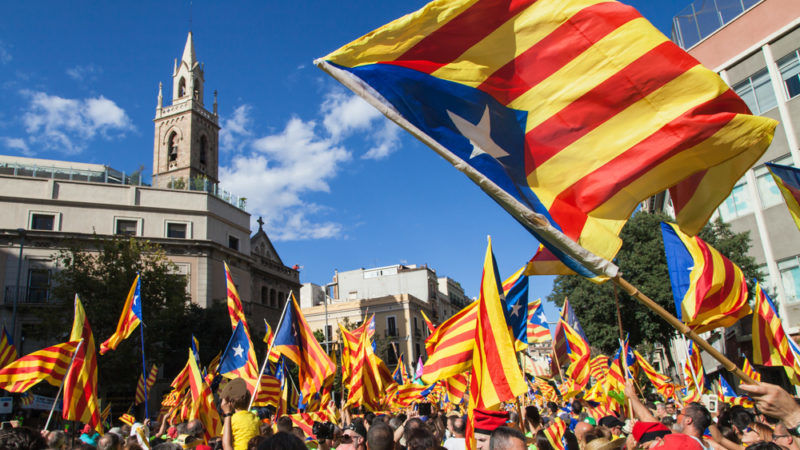 Ahead of Sunday's (1 October) independence referendum, Professor Dr Josep-Maria Terricabras writes that the Constitutional Court of Spain is no longer what the Spanish constitution had enacted.
News

Lawmakers from Poland's ruling Law and Justice (PiS) party on Wednesday (12 July) pushed through a bill to give parliament a greater say in appointing judges, a move that the opposition and rights groups said violated the constitutional separation of powers.
News

Poland dismissed on Monday (20 February) demands that it implement judiciary reforms deemed essential by the European Commission to uphold the rule of law.
News

Poland's foreign ministry on Thursday (22 December) dismissed the EU's latest warning that changes to the country's constitutional court pose a serious challenge to the rule of law.
News

The EU yesterday (21 December) gave Poland's rightwing government another two months to reverse changes to its constitutional court or face sanctions, warning they posed a "substantial" challenge to the rule of law.

Tens of thousands of protesters hit the streets of the Polish capital Warsaw Saturday (24 September) to rally against moves by the rightwing Law and Justice (PiS) government that they say undermine the rule of law.
News

Global ratings agency Moody's warned Thursday (25 August) that an escalating constitutional crisis in Poland is threatening to hurt investment in the EU's largest eastern economy and could affect its credit rating.
Opinion

Critics of Hungary "lack objectivity" and it is a "fantasy" to say the press is not free in this country, said László Trócsányi, Hungary's Minister of Justice. The Orbán loyalist maintains that democracy can exist in both neo-liberal and "more conservative" contexts. He spoke to Georgi Gotev for EURACTIV France.
News
Europe's East 06-05-2013

Brussels has warned Portugal to stick to the bailout austerity measures agreed in 2011 or risk losing further financial hep. The warning came following a decision by the Portuguese constitutional court to reject a set of unpopular public spending cuts aimed at reducing the country's deficit. In a televised speech on Sunday, Portugal's prime minister Pedro Passos Coelho described the country's economic situation as a 'national emergency' and pled to follow the terms agreed with international lenders.
News
Euro & Finance 02-01-2013

Portuguese President Aníbal Cavaco Silva said in his new year speech that he will send his country’s controversial 2013 budget to the Constitutional Court. The move could put at risk a €78 billion bailout deal from the eurozone and IMF.
VideoPromoted content
Central Europe 22-08-2012

The European Commission today (14 August) downplayed any risk of a substantial delay in Germany’s final approval of the eurozone's permanent bailout fund despite efforts to postpone a ruling on its legality.
News

France's Constitutional Council ruled yesterday (9 August) that the EU's budget responsibility pact did not require a change to the constitution, easing the path to ratification of the accord and removing a potential headache for President François Hollande.
News

Romania's Constitutional Court is under "shocking" political pressure ahead of its ruling on the validity of a referendum to impeach the president and has appealed to the Council of Europe for protection, a council official said on Tuesday (7 August).
News

Attempts by Romania’s new prime minister, Victor Ponta, to impeach the country’s president Traian B?sescu – under way at an extraordinary meeting in the Bucharest parliament this afternoon – are rattling the Commission amidst concerns over democracy.
News

Germany's Federal Constitutional Court has avoided a stand-off with the European Court of Justice (ECJ) over how to balance competencies between the EU and its member states. The move is seen in Brussels as a relief, as in the past Germany had blocked further EU integration with its Constitutional Court rulings. EURACTIV Germany contributed to this article.
Opinion
Enlargement 27-05-2008

What is happening in Turkey?

Turkish politics is on the brink of a new era as whatever the outcome of the Constitutional Court’s ruling on the Justice and Development Party (AKP), a new political landscape will emerge after the changes are enforced, argues Senem Aydin Düzgit in a 22 May commentary for the Centre for European Policy Studies (CEPS).
News

The German presidency will start on 1 January 2007 without the country having ratified the EU Constitutional Treaty, following a decision by the German Constitutional Court.
News
Future EU 27-03-2002

On 26 March 2002, the European Parliament's Constitutional Committee discussed a report by French MEP, Alain Lamassoure, on the delimitation of powers between the EU and the Member States. In his report, Mr Lamassoure calls for a European constitutional court and proposes a list of five different categories of powers, ranging from exclusive powers to shared and supplementary powers.
RSS - constitutional court