The peace plan agreed to by France, Germany, Ukraine and Russia in Minsk on Wednesday to stop the fighting in eastern Ukraine is a 'weak solution', according to Lithuanian President Dalia Grybauskaite.
Promoted content 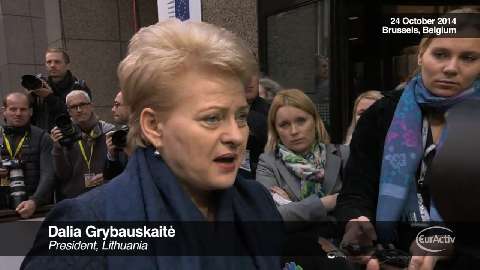 On her arrival at the December 2014 EU Summit on Friday, Lithuanian President Dalia Grybauskait? said that “each year we have a final revision of the budgets and some countries need to pay, some countries receive money back.”
Promoted content
Global Europe 19-12-2013

Heads of state and government are meeting in Brussels on 19 and 20 December for a European Council summit. Security and defence and the economic and monetary union are the main topics on the agenda.
Promoted content
Data protection 25-10-2013

As EU leaders gather in Brussels for a 2-day summit, Lithuanian President Dalia Grybauskait? said on Friday that Brussels expects to reach a deal on a free trade deal with Ukraine in the upcoming Eastern Partnership Summit in Vilnius. Refereeing to recent allegations that the US had been tapping the phones of European leaders, Grybauskait? stressed the need to find a 'balance between data protections for European citizens' and 'international security'.
Promoted content
Future EU 08-02-2013

EU leaders are meeting in Brussels for a two-day summit (7-8 February) to forge a deal on the Union's 2014-2020 budget. Diplomats point out that it is “now or never” for heads of state and government to agree ahead of multiple elections in 2013.
RSS - Dalia Grybauskait?