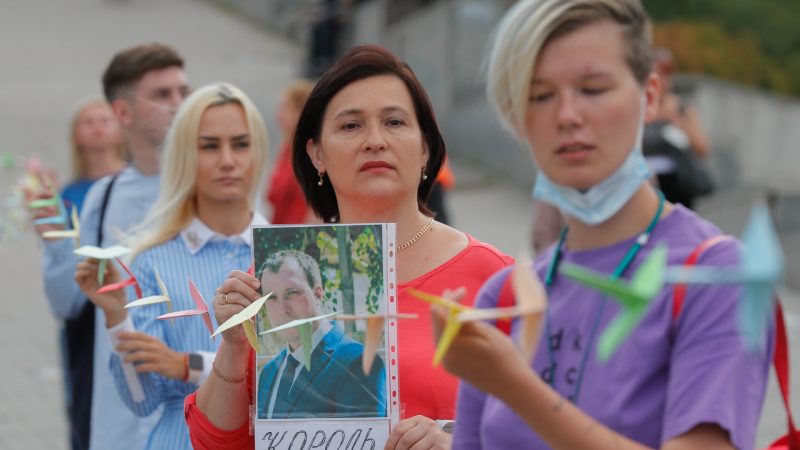 Ukraine expects to exchange around 100 prisoners on each side with Russian-backed separatists within weeks, President Volodymyr Zelenskiy's chief of staff told Reuters on Thursday (6 August) on a visit to eastern Ukraine.
Opinion

The EU should reconsider its 'all or nothing' approach on sanctions imposed on Russia for its role in the ongoing conflict in eastern Ukraine, as well as its annexation of Crimea, a new report from the International Crisis Group suggests.
Opinion

There has been an increased number of calls for rolling back the EU sanctions against Russia in order to help contain the spread of the coronavirus, but this idea is dangerous, argues Inna Sovsun.
News

The first hearing in the trial of four fugitive suspects in the downing of Malaysian Airlines Flight 17 was set to start in Amsterdam on Monday (9 March), more than five years after the plane was downed in Ukraine.
Opinion

Just like the United States has done, the EU must sanction Russians who have become rich by breaking the law or using force in their country, writes Anna Talimonchuk.
News

In a wide-ranging interview, Ariel Cohen, a US lobbyist with ties to Kazakhstan, spoke about the various international initiatives of the Central Asian country, including improving US-Russia relations, finding a solution to the Ukraine crisis, nuclear arms control and more.
News

Three Russians and a Ukrainian will face murder charges for the deaths of 298 people aboard Malaysia Airlines Flight MH17 that was shot down over eastern Ukraine in 2014, the international investigative team said on Wednesday (19 June). The suspects...
News

The Netherlands is considering dragging Russia to an international court over the downing of flight MH17 after talks over responsibility ground to an impasse, the Dutch foreign minister said Thursday (20 December).
Opinion

The leniency of the West encouraged Russia to take its aggression against Ukraine to a new level, writes Mykola Tochytskyi, who puts forward several recommendations.
Interview

The United States on Monday (12 November) dismissed leadership elections in separatist-controlled areas of eastern Ukraine as a "sham" one day after voters cast their ballots.
News

The OSCE mission monitoring the conflict in eastern Ukraine said yesterday (18 July) claims that Russia's security agency had received inside information about its activities came as a major blow.
Opinion

The UN Security Council condemned yesterday (6 June) "continuous violations of the ceasefire" in Ukraine's east and called for an immediate withdrawal of heavy weapons.
Opinion

In Donbass, Ukraine is experiencing a catastrophe comparable with the 1986 Chernobyl nuclear disaster. Now as then, it is urgent to restore the confidence of the affected people in the state and their trust to each other, argues Sergii Parashyn.
Interview

In a wide-ranging interview on Monday (5 March), Russia’s ambassador to the EU Vladimir Chizhov discussed Syria and eastern Ukraine, the current tensions between Gazprom and Naftogaz, as well as the Italian election.
Read more »»
RSS - Eastern Ukraine crisis