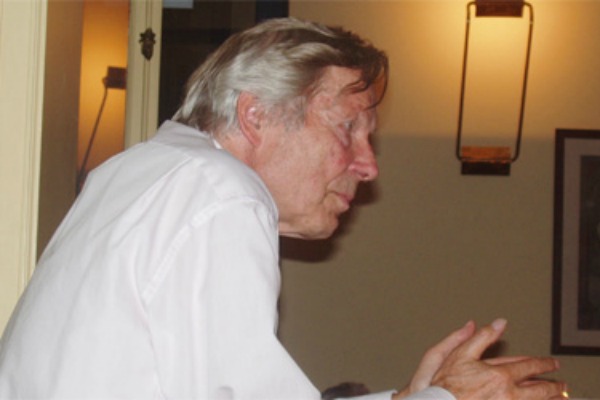 Europe will soon be a dwarf lacking the leverage to weigh in world affairs. It is in the European interest to work on a long-term membership deal for the three, now associated, countries south of Russia, writes Eberhard Rhein.
Opinion
Energy 07-11-2013

The IPCC needs submit courageous and realistic proposals when presenting its reports on the impact of climate change in Warsaw, Poland, this month, writes Eberhard Rhein.
Opinion
Science & Policymaking 25-10-2013

Policymakers should stop talking about “climate policy”. It is energy policy that matters to preserve the global climate, argues Eberhard Rhein.
Opinion
Energy 26-09-2013

The five-year mandate of the present European Commission President expires 31 October 2014. Contrary to the restrictive provisions concerning the president of the European Council and the members of the Court of Justice, the EU Treaty is silent over the possibility of reinstating the Commission's presidents and members, writes Eberhard Rhein.
Opinion
Science & Policymaking 25-09-2012

The Lisbon Treaty introduced a major institutional innovation in the field of external relations by creating a common diplomatic service, the European External Action Service (EEAS). During the past 20 months this service has progressively been set up. With some 3,000 officials and an annual budget of around €500 million, it is still small but unique in its talents and language skills.
Special ReportOpinion
Energy 15-06-2012

The EU must urgently develop a continental power grid

Germany's decision to go non-nuclear, which has infuriated its neighbours, might one day appear as a blessing in disguise, says Eberhard Rhein.
Opinion
Global Europe 14-09-2011

The EU must make peace between Israel and Palestine one of the top priorities of its Middle East policy. But there can be no peace in the region without a viable Palestinian state, argues Eberhard Rhein.
Special ReportOpinion
Energy 07-07-2011

US, EU should fix tougher fuel efficiency standards by 2025

China and the EU strive for the lead in wind energy

Wind power is the next great source of renewable energy, with China and the EU engaged in a competition to dominate the rapidly expanding market, argues Eberhard Rhein.
Opinion
Transport 06-06-2011

Including aviation in the EU's emissions trading scheme does not violate international trade law and will in fact pave the way for other nations to develop their own emissions trading systems, argues Eberhard Rhein.
Opinion
Development Policy 23-05-2011

A single binding international climate agreement will remain a chimera

Eberhard Rhein argues that Copenhagen and Cancún-style UN climate conferences should be discontinued in favour of more regular meetings of the most polluting countries.
Opinion
Development Policy 19-05-2011

A rapid German exit from nuclear energy may prove beneficial

The "upgrade" of the EU's representation in the UN General Assembly will lead to a more coherent EU foreign policy and encourage other regional organisations to raise their profile as well, predicts Eberhard Rhein, a lecturer on economic policy at the Mediterranean Academy for Diplomatic Studies in Malta.
Opinion
Development Policy 21-04-2011

Wind is already Europe's second most important source of renewable energy, but by 2050 it should be both economically and technically feasible for it to become the continent's primary source of overall energy, argues Eberhard Rhein.
Opinion
Transport 13-04-2011

Taxing fuels according to their energy content makes sense

The European Commission is considering taxing fuel according to energy content rather than volume – a move that is long overdue, writes Eberhard Rhein in an April blogpost.
Opinion
Global Europe 07-04-2011

US puts supply security at centre of future energy policy

More oil and gas drilling, biofuels, the abandonment of climate change ambitions and perhaps more fuel-efficient vehicles: this is the United States' recipe for energy in the next decade, writes Eberhard Rhein in a post on Blogactiv.
Opinion
Med & South 23-02-2011

What role for the EU in reforming the southern Mediterranean?

Thanks to the recent political upheaval in North Africa the EU has rediscovered the area, writes Eberhard Rhein in his latest blogpost. However, it will take years to make up for past neglect and help countries to address the crucial issue of democratic governance, he argues.
Opinion
Global Europe 31-01-2011

Recent events in Tunisia will have a profound impact on democracy and political freedom in the Arab world, while the EU – which had turned a blind eye to authoritarian rule and corruption in the country – must support the 'Jasmine Revolution', writes Eberhard Rhein in a January blog post.
Opinion
Med & South 23-04-2010

Union for the Mediterranean has to get serious

"The EU needs to fundamentally modify its approach to its Mediterranean partners," writes Eberhard Rhein, a lecturer at the Mediterranean Academy for Diplomatic Studies in Malta, in an April post for Blogactiv.
Opinion
Climate change 21-01-2010

How to pass from Copenhagen to Mexico

"What role could the EU play to obtain a more successful outcome in Mexico [than in Copenhagen]?" asks Eberhard Rhein, a lecturer at the Mediterranean Academy for Diplomatic Studies in Malta, in a January post on Blogactiv.
Opinion
Med & South 25-06-2009

Solar energy from the Sahara: When will it be feasible?

"The EU and its North African partner countries should […] establish the regulatory basis necessary for the development of solar energy in view of offering a reliable and long-term framework for potential investors from both sides of the Mediterranean," writes Eberhard Rhein, a lecturer at the Mediterranean Academy for Diplomatic Studies in Malta, in a June post on Blogactiv.
Opinion
EU Priorities 2020 17-12-2008

The French EU Presidency recorded victories regarding the future of the Lisbon Treaty and the economic recovery and climate change packages at last week's EU summit, argues Eberhard Rhein, a lecturer on economic policy at the Malta-based Mediterranean Academy for Diplomatic Studies, in a post on Blogactiv.
Opinion
Brexit 25-11-2008

G20 should be main forum for global economic governance

"The G8 has been more and more eclipsed by the G20," which should now become the main forum for global economic governance, argues Eberhard Rhein, a lecturer on economic policy at the Malta-based Mediterranean Academy for Diplomatic Studies, in a post on Blogactiv.
RSS - Eberhard Rhein