Some 59% of French citizens do not see the prospect of the Western Balkans countries' EU accession in a positive light, a new study has found. But it also revealed increasing mistrust toward the bloc overall.

Albanian Prime Minister Edi Rama calls for clearer enlargement prospects for the Western Balkans, saying it would be a "huge mistake" for the EU not to continue its engagement with the countries in the region. EURACTIV.fr reports.

During new Macedonian Prime Minister Zoran Zaev's visit to Sofia on Tuesday (20 June), it was announced that Bulgaria and Macedonia will soon sign a bilateral treaty, removing some obstacles to Skopje’s bid to join NATO and the EU.

The 27 member states that attended the Bratislava summit all had different priorities. Austria seems to have left Slovakia without any real movement on any of theirs, as little has changed regarding Turkey’s membership bid and CETA. EURACTIV Germany reports....

Austria's Chancellor Christian Kern on Wednesday called on the European Union to end membership talks with Turkey in the wake of a massive government crackdown following a failed coup. 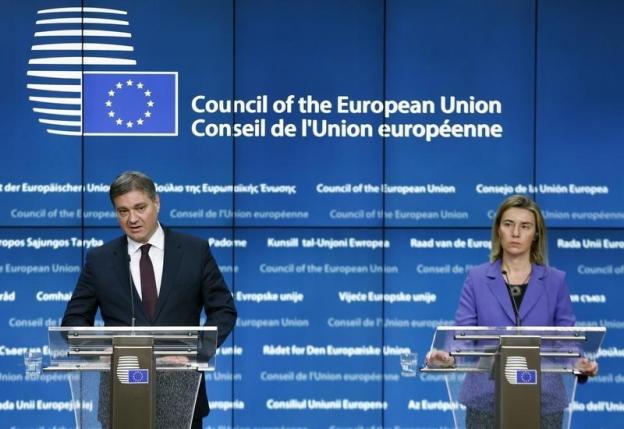 Bosnia's rival leaders agreed on Sunday  (31 August) on the key conditions set by the European Union for accepting the country's membership application and cleared the way for winning a much needed IMF loan deal, which was delayed three weeks ago.

Bosnia and Herzegovina will submit its application for EU membership in the New Year, bringing up its planned submission date from January 2017. EURACTIV Germany reports.

As tensions rise again in Kosovo after the killing of a Serbian politician in the North, the country's minister in charge of EU affairs, Vlora Çitaku, called on the EU to be more “responsive” towards her newly-formed state.

European Union membership has taken centre stage in the Scottish independence debate amidst a bitter legal wrangle about Scotland's status if it secedes from the UK following a scheduled referendum in 2014.
RSS - EU accession