Europe lacks a "grand design" and must move on from utilitarian concerns by becoming an "ideological project" if it is to have a significant impact at global level, argues prominent author and historian Elie Barnavi in an interview with EURACTIV. 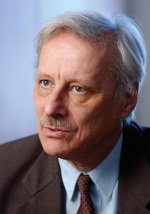 Central and Eastern Europe has seen tremendous changes since the fall of the Berlin Wall, moving from state-sponsored socialism to market democracy and EU membership in less than 15 years. EURACTIV spoke with a leading academic about the legacy of enlargement, political and social realities in the new member states, and future challenges.
Future EU 07-03-2006

In this interview with EURACTIV Romania, Professor of European Politics Anand Menon, director of the European Research Institute at Birmingham University, talks about EU enlargement as something that won't happen again; shares his views on the British Presidency's track record and the French's "lack of courage of their convictions," and says that the Constitutional Treaty is "dead". But the EU "will struggle on".

In this interview with EURACTIV, Pat Cox, the new President of the European Movement International and former EP President, talks about his "appetite for campaigning", the Irish experience with referendums and the EU's biggest current challenges.

The Austrian Green MEP Johannes Voggenhuber was, together with British Liberal Andrew Duff, the Parliament's rapporteur on the EU Constitution. Both MEPs are also rapporteurs for the report on the period of reflection, to be voted in plenary in the January 16 -19 session. In an exclusive interview with EURACTIV, he commented on how likely the Austrian Presidency were to relaunch the stalled constitutional process.
Future EU 26-05-2005

Alain Lamassoure: the French are in the grip of “collective nervous depression”

Contrary to widely held perceptions, Alain Lamassoure (PPE-DE) says that the debate on the Constitution shows that the French have become much more pro-European than at the time of the referendum on Maastricht. He told EURACTIV that a victory by the 'no' camp would be essentially due to French people’s concerns about their economy.

Clash between socio-cultural and single market coalitions “currently a draw”

If approved, the Constitution will be the first time an EU treaty has included an explicit reference to sport. A Danish sports lawyer talks EURACTIV through the legal implications for the embryonic European Sports Policy.

Pervenche Berès: “Who’s talking about going back to Nice?”

In an interview with EURACTIV, socialist MEP Pervenche Berès says a French 'no' vote on the EU constitution would not call into question the years of hard work spent reaching a consensus.
Sports 06-08-2004

Sport, and its balance between professionalism and amateurism, will continue to be determined by the national and international federations and associations, says MEP Michel Rocard in an interview with EURACTIV.
Security 03-03-2004

Joanna Apap, head of the Justice and Home Affairs research unit at the Centre for European Policy Studies gives a strong warning to Member States not to undermine human rights through security measures.
Security 09-12-2003

Full interview with Robert Evans, MEP – “Codecision [in JHA] will have a significant impact on the t

Parliament's President Cox is convinced that the 21st century would see Europe's second renaissance, when following the consolidation of a process of unification, the EU will deliver on jobs, peace and stability and enhance the living standards and quality of life of all its people.
Future EU 17-06-2003

MEP Dybkjær insists that national parliaments should be much more involved in EU policy making.
Security 04-06-2003

Belgium's Prime Minister Guy Verhofstadt believes that the interests of the smaller nations will no longer be properly represented in an EU run by a permanent president.
Science & Policymaking 21-05-2003

Commissioner Michel Barnier cautions that the European Convention and the coming Intergovernmental Conference are the last chance for real reforms.
Future EU 18-05-2003

Wim Philippa, Secretary General of the European Round Table of Industrialists (ERT)

The longer-term effects of enlargement on the EU process will largely depend on whether the Convention succeeds in making the EU's decision-making procedures more effective, says Wim Philippa, Secretary General of the European Round Table of Industrialists.
Future EU 07-05-2003

Vice-Chairman of the European Convention, Jean-Luc Dehaene, concedes that there is still danger that the next EU reform will not be sufficient for enlargement. But he believes that the Convention can contribute more radical proposals because, unlike the Intergovernmental Conference, it is a political and not a diplomatic body.
RSS - Eu Constitution