Only a short time ago, nobody believed Ukraine could deliver on Euro 2012. In the event, Ukraine rose to the challenge and, together with Poland, hosted one of the most successful tournaments ever. Now Ukraine’s leadership must rise to another challenge. It must demonstrate in actions rather than words that it is committed to European integration, argues Amanda Paul.
Special ReportOpinion
Ukraine 02-07-2012

The Euro 2012 became a genuine festival of people-to-people contacts and cultural exchange in a wider United Europe by taking place in "undiscovered territory" - Ukraine, Kostiantyn Yelisieiev say in an op-ed first published in The Guardian.
News 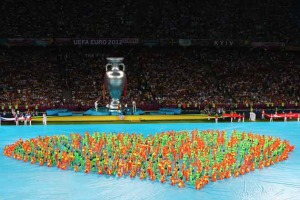 Most commentators were positive about Ukraine and Poland's hosting of the Euro 2012 football championship, despite media badmouthing of Kyiv and a boycott at the political level over the imprisonment of the country's former Prime Minister Yulia Tymoshenko.
News
Europe's East 20-06-2012

Spain joins ‘the Group of Debt’

Madrid has secured €100 billion to rescue its banks in an attempt to pre-empt the threat of a bank run if the debt crisis in another troubled country, Greece, flares again. But angry Spaniards accused Prime Minister Mariano Rajoy of ill-timed triumphalism and an inappropriate trip to Poland to watch Spain compete in the Euro 2012.
News
Sports 06-06-2012

A Ukrainian diplomat yesterday (5 June) slammed a BBC documentary depicting the presence of racism and hatred at stadiums in his country. The documentary was released just days before Friday's start of the Euro 2012 football cup, which Ukraine is co-hosting with Poland.
News
Europe's East 25-05-2012

Ukraine asks EU to be patient for Tymoshenko solution

All the major political parties in the European Parliament united yesterday (24 May) to back a resolution putting pressure on Ukraine to free the jailed former Prime Minister Yulia Tymoshenko.
News
Sports 04-05-2012

Poland and Ukraine, which are co-hosting the Euro 2012 football championship in June, strongly criticised European politicians who said they would not attend matches played in Ukraine in sign of protest against the imprisonment of former Prime Minister Yulia Tymoshenko.
News

In a conversation that included the Tymoshenko trial and the Euro 2012 Football Championship, Ambassador Nataliya Zarudna says Ukraine is committed to European integration as a 'civilisational choice' and argues that the German authorities should be more understanding of her country's difficulties.
Special ReportNews

Preparations for the Euro 2012 football championships, which Ukraine is set to co-host with Poland, have been mishandled and could result in a foreign debt catastrophe for Kyiv, independent experts have warned.
News

The successful preparation of Euro 2012 will be a moral application for Ukrainian EU membership, the country'se deputy foreign affairs minister, Konstantin Yelisieiev, told EURACTIV in an exclusive interview.
RSS - Euro 2012