Russia on Monday (11 November) said the resignation of Evo Morales as Bolivian president looked like the result of a coup, while the European Union called for restraint on all sides.
News

Bolivian President Evo Morales is confident of defusing tensions with the EU after his country passed a law increasing the amount of coca plant that can be legally cultivated. EURACTIV Spain reports.
News

The European Union’s delegation to Bolivia has lodged a protest with the government for its use of an image of its ambassador, Timothy Torlot, in a referendum campaign that will decide if President Evo Morales may stand again in 2019.
News

Civil society could force governments to stick to their climate commitments

Civil society is making increasing use of national courts to enforce international environmental agreements. Even a non-binding agreement in Paris will increase pressure on governments to cut emissions. EURACTIV France reports.
News

Bolivia: ‘For a lasting solution to the climate crisis we must destroy capitalism’

Bolivia's national contribution to the COP 21 describes capitalism as "a system of death" that has to be destroyed to protect humanity and Mother Earth. EURACTIV France reports.
News 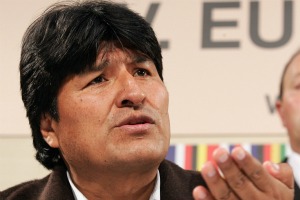 Bolivia's leftist President Evo Morales marked May Day yesterday (1 May) by nationalising the local unit of Spain's Red Electrica. In the meantime, as a sign of growing tension, a bomb exploded outside the EU headquarters in Argentina, which is seizing control of another Spanish company, Repsol.
RSS - Evo Morales