It is absolutely essential to have more coherent, structured, well-framed relations between the EU and Russia, said Thierry de Montbrial, founder and Director General of the French Institute for International Relations IFRI, in an exclusive with EURACTIV, on the occasion of Putin's coming inauguration on 7 May for a new mandate as president.

French Interior Minister Claude Guéant pleaded yesterday (26 April) for a Schengen revamp in line with the anti-immigration rhetoric of Nicolas Sarkozy, who faces an uphill battle for re-election  on 6 May. He obtained the support of Germany and Austria, but was rebuked by Belgium and Sweden.
Central Europe 24-04-2012

Far from showing unease about his many critics who accuse him of an authoritarian drift, Hungarian Prime Minister Viktor Orbán said in Brussels yesterday (23 April) that his country should be seen as a "laboratory" for transforming the EU economically and politically.
Elections 23-04-2012

Far-right candidate Marline Le Pen scored the biggest surprise in the first round of France's presidential election, winning 18% of votes yesterday (22 April) in a showing that could tip the runoff between Socialist favourite François Hollande and conservative President Nicolas Sarkozy.
Elections 16-04-2012

François Hollande, the Socialist candidate and apparent front-runner in the French presidential election, suffered a blow as Portugal became the first EU country to ratify the 'fiscal compact' treaty that is designed to enforce stricter budget discipline in the eurozone.

French President Nicolas Sarkozy, facing the first round of elections this weekend, said in a campaign speech yesterday (15 April) that he wanted to open a debate on extending the mandate of the European Central Bank (ECB) to support economic growth.

Foreign correspondents based in Paris have criticised the leading candidates in the French presidential elections for avoiding substantive economic issues in favour of headline-grabbing, but largely symbolic proposals, EURACTIV France reports.
Elections 29-03-2012

Jacques Delors, the former European Commission president widely seen as one of the 'fathers of Europe', said yesterday (28 March) that EU leaders were "killing Europe", replacing the community method by inter-governmental solutions and nationalism, with the complicity of the Union's institutions.
Justice & Home Affairs 22-03-2012

French President Nicolas Sarkozy, who faces an uphill battle for re-election, realises he cannot win without "accepting the ideas" of the far right, a leading MEP told a Brussels audience yesterday (21 March).

Guy Vehofstadt, leader of the liberal ALDE group, said yesterday (13 March) that the recent verbal attacks by French President Nicolas Sarkozy on immigrants and the Schengen agreement were worse than the silence of the Dutch government over the discriminatory website of the Dutch Freedom party (PVV).
Justice & Home Affairs 14-03-2012

The top French official responsible for immigration said the EU should build a wall along the 130-kilometre Greek-Turkish border, comparing it to the one between the USA and Mexico.
Elections 12-03-2012

French President Nicolas Sarkozy, the champion of European integration during his country's EU presidency in 2008, has appeared to turn a cold shoulder to Europe in campaign stump speeches laced with nationalism as he heads towards a first-round election in April.

2012 is a year of elections in France, the United States and Russia, but energy and elections are "not a good couple", because energy policies are "quite complicated" for an electoral debate, Energy Commissioner Günther Oettinger told a Brussels audience today (6 March).
Euro & Finance 01-03-2012

A "no thrill" EU summit starting today (1 March) will avoid several contentious issues against the background of the French election campaign. Instead, leaders are poised to give speeches about "growth",  congratulate themselves for the re-election of Herman Van Rompuy as Council president and sign the 'fiscal compact' treaty.

Nine EU countries have asked the Danish presidency to put the financial transaction tax (FTT) on the 27-country bloc's agenda without delay, the French government announced in a statement yesterday (7 February).

French lawmakers appealed to their country's highest court yesterday (31 January) to overturn a law that makes it illegal to deny that the mass killing of Armenians by Ottoman Turks nearly a century ago was genocide.
Euro & Finance 30-01-2012

President Nicolas Sarkozy is facing new allegations of involvement in an old weapons sales scandal four months ahead of French presidential elections, according to court testimony disclosed by the daily Libération.

Turkey has warned France of grave consequences should the French Senate pass a bill today (19 December) that would penalise denial of the massacre of over 1 million Armenians in 1915 by the Ottoman Empire. 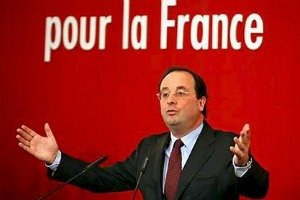 As the majority in the French Senate swung to the left yesterday (25 September), François Hollande, the front runner of the Socialist Party for the 2012 Presidential election, declared "dead" the push of the centre-right to enshrine a 'golden rule' in the country's constitution, aimed at limiting debt. EURACTIV France reports.
Read more »»
RSS - French elections 2012