A quiet transition has taken place under the Georgian Dream government, bringing the country in line with a fully-matured western democracy, writes Amanda Paul.
Opinion
Elections 25-10-2013

Mikheil Saakashivili, the Georgian leader since 2004, will have to step down following the 27 October presidential election. His legacy divides opinion, but he will be remembered as a dynamic leader who envisioned Georgia as a modern state in the Western world, writes Krzysztof Lisek.
News
Elections 03-10-2012

Both the opposition coalition Georgian Dream and the ruling United National Movement (UNM) of President Mikheil Saakashvili claimed victory in the parliamentary elections held yesterday (1 October). Regardless of the final results, the poll appears to mark the end of the single-party rule in the Western-backed nation.
News

EXCLUSIVE: In an escalation of rhetoric, civil rights groups accused the Georgian authorities of preparing massive fraud in order to win the 1 October parliamentary election. In response, a Georgian diplomat told EURACTIV that the government had evidence of links between some opposition politicians and organised crime figures in plotting a coup d’état.
News 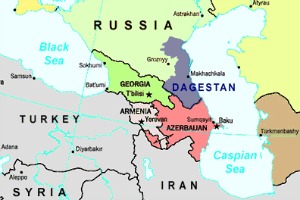 Georgian forces shot dead 11 gunmen and three soldiers were killed in an operation to free hostages near the border with Russia, the Interior Ministry said yesterday (29 August). The European Commission said it was following the situation with concern.
News

Council of Europe representatives expressed concern today (21 August) about complaints from the Georgian Dream opposition coalition that government authorities have seized its bank accounts ahead of the parliamentary elections due on 1 October.
News
Europe's East 24-07-2012

The government of Georgia and media related to opposition leader Bidzina Ivanishvili have traded accusations, generating a tense climate ahead of parliamentary elections in October.
Interview
Elections 24-07-2012

Vice PM: Pro-Russia opposition in Georgia is ‘bribing’ the voters