Discord broke out in German Chancellor Angela Merkel's ruling coalition Sunday (7 July), after the United States urged the country to send ground troops to Syria as Washington looks to withdraw from the region.
News

The power struggles in Germany's grand coalition, such as the Maaßen case, are eyed with growing concern from abroad. What does the EU think about the state of the Bundesregierung? EURACTIV Germany reports.
News

Germany’s controversial constitutional protection chief Hans-Georg Maaßen may have had to leave his current post but he has already been promoted to state secretary in the German Ministry of the Interior. EURACTIV Germany's partner Der Tagesspiegel reports.
News

A humanitarian ship that has had about 230 rescued migrants on board for almost a week docked in Malta yesterday (27 June), ending a stand-off with Italy which refused to let the ship into one of its ports.
News

Greek Prime Minister Alexis Tsipras is ready to sign a deal with German Chancellor Angela Merkel to make it easier for Germany to send asylum seekers back to other European countries, the Financial Times reported yesterday (27 June).
News

German Chancellor Angela Merkel and her Spanish counterpart agreed yesterday (26 June) to cooperate on migrant policy, saying a European approach was the only way forward as her Bavarian allies pile pressure on her to deliver a deal this week.
News

Chancellor Angela Merkel's presumably last term in office appears to be by far the hardest of her career. EURACTIV Germany looks at the crucial week ahead.
News

German Chancellor Angela Merkel was fighting Tuesday (12 June) to stamp out the first major row within her uneasy coalition, as disputes over her refugee policy returned to haunt her while she negotiates a broad EU asylum deal.
News

Chancellor Angela Merkel gathered her new cabinet for a two-day retreat on Tuesday (10 April), seeking to forge some team spirit among ministers already squabbling after just a month in office.
News

Angela Merkel on Sunday defended "painful" concessions she has made to the Social Democrats (SPD) to win a fourth term as German chancellor and said criticism among her conservatives was not a sign her authority was waning.
Interview

In the draft of the German coalition agreement presented on Wednesday by the CDU/CSU and the SPD, the parties want to pursue a “departure for Europe” in the next four years. EURACTIV Germany spoke to Matthias Kullas about the European policy aspects of the draft text.
News

Senior members of German Chancellor Angela Merkel's conservatives on Saturday (9 December) rejected the vision for a "United States of Europe" put forward by the Social Democrats (SPD), with whom they are hoping to form a governing coalition.
Opinion

For three weeks, Germany’s politics have been frozen while we awaited the result of regional elections in the northwestern Bundesland Lower-Saxony over the weekend. Angela Merkel may now be wishing politics would remain frozen, writes Olaf Boehnke.
News 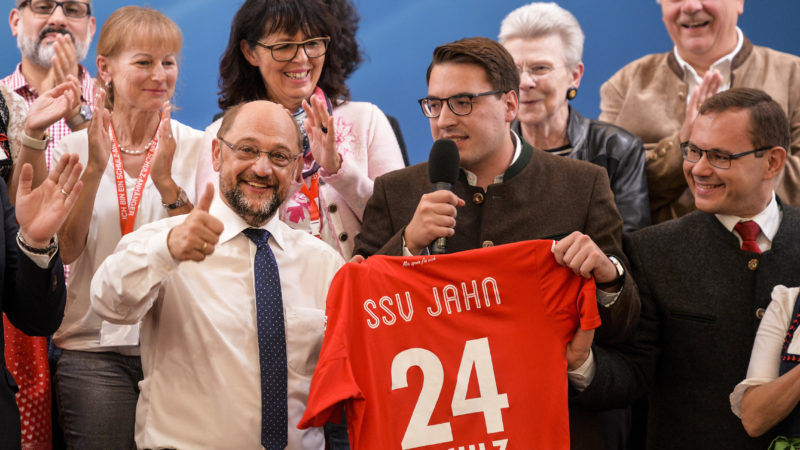 Chancellor Angela Merkel's Social Democrat (SPD) challenger said on Sunday (10 September) his party would not form any alliances after the 24 September election unless fair wages, free education, secure pensions and a commitment to a democratic Europe were guaranteed.
News

Push for energy diversification puts German coalition to the test

A debate over whether Germany needs to rethink its energy strategy, and reduce its dependence on Russian gas imports, is causing tensions within Chancellor Angela Merkel's right-left coalition.
Read more »»
RSS - German coalition