Only eight EU member states have banned the solidarity offence from their national laws. This offence is often used to prosecute citizens and organisations assisting migrants. EURACTIV.fr reports.
Video

The Syria trust fund, used to help Syrian refugees and overstretched host communities in Lebanon, Turkey, Jordan and Iraq, will also be used to help the migrants who made it to Macedonia and Serbia, an EU official said on Monday (1 February).
VideoPromoted content 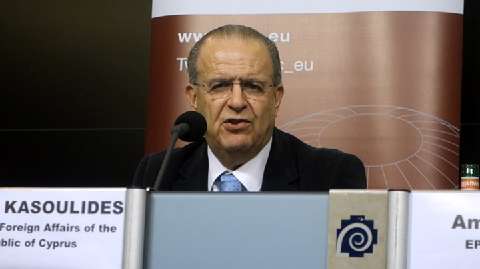 Cypriot foreign minister: It’s rubbish to say that we are giving bases to Russia

Asked by EURACTIV to comment on press reports about Cyprus being ready to provide air and maritime bases to Russia, Cypriot foreign minister Ioannis Kasoulides branded them “rubbish”.
News

EU leaders gathered in Brussels for their last summit meeting of the year on Thursday (18 December). They overcame divisions on Juncker's investment plan. On Russia, new European Council President Donald Tusk pushed to have a united front and long-term strategy.
Interview

Well over a million people have been forced from their homes, and many more face severe hunger, due to continued violence in South Sudan, according to a senior UN official.
News
Development Policy 02-05-2014

The EU commissioners dealing with development cooperation and humanitarian aid have pledged more work on “resilience”, defined as the ability of individuals and communities to recover from shocks and stresses.
Opinion

The Central African Republic (CAR) – torn apart since December by widespread conflict and killings of civilians by armed groups – is unravelling. The consequences are already catastrophic for many people. Almost the entire population is in desperate need of food, writes Arif Husain.
VideoPromoted content
Global Europe 19-12-2013

The heads of the UN and European Union aid agencies called on Wednesday (18 December) for a "humanitarian ceasefire" in Syria to allow convoys to deliver help to areas that aid workers cannot reach.
News
Development Policy 19-08-2013

EXCLUSIVE / EU Humanitarian Aid Commissioner Kristalina Georgieva has urged the United Nations Security Council to adopt a declaration on the humanitarian situation in Syria, telling EURACTIV in an interview that such a decision could greatly improve the fate of millions of citizens, half of them children, who are trapped by the ongoing civil war.
News

Some 50 donors, among whom the largest was the EU, promised a total of 7.3 billion euros for the reconstruction of earthquake-hit Haiti at a conference in New York yesterday (31 March). The EU contribution amounts to €1.235 billion, the bloc's foreign affairs chief Catherine Ashton announced.
RSS - humanitarian assistance