Just when the European Union needs to act as one to prevent major powers from fomenting division, EU institutions and member states seem to lack the political will to set aside their disagreements and focus on the common interest, write Steven Blockmans, Loes Debuysere and Stefani Weiss.
News

European Union leaders on Sunday (1 December) celebrated the 10th anniversary of the Lisbon Treaty, the union's legal cornerstone, amid calls to reform a bloc weakened over the past decade by economic and migration crises, rising euroscepticism and Brexit.
News 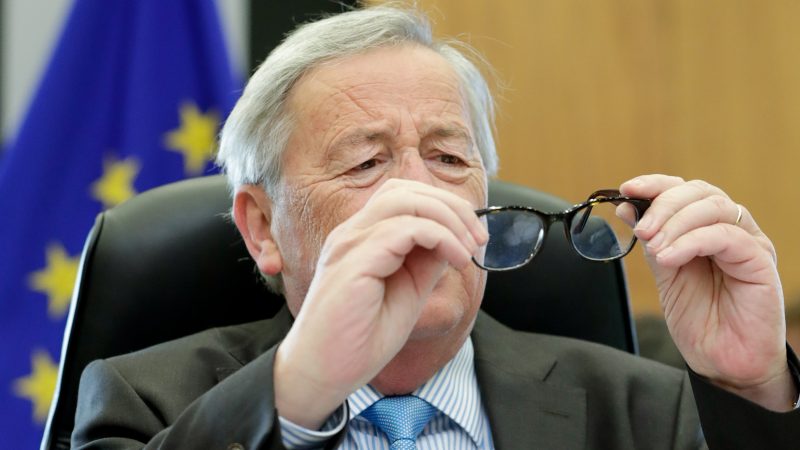 European Commission President Jean-Claude Juncker has urged member states not to name short-term replacements for the Commissioners that have been elected as MEPs, insisting there is not enough work for 28 Commissioners anyway.
Opinion

Europe is about democracy. We cherish democracy in our national institutions by ensuring a healthy separation of powers, by fighting for free and fair elections, and by combining the rule of the majority with the protection of the minority, write Louis Drounau and Andrew Duff.
Opinion

Brexit has become a ‘21st Century Ulster Question’, writes Dick Roche, who also suggests how it can be solved.
News

“If a member of the European Union is the victim of armed aggression on its territory, other states have an obligation of aid and assistance by all the means in their power.”
Opinion

The Northern Irish DUP party, a junior coalition member to Theresa May’s government, is a stumbling block to unlocking the Brexit talks. Dick Roche gives the receipt how the problem can be solved.
News

A few weeks after the European Commission launched yet another task force to look at ways to improve legislative scrutiny, national and regional parliaments representatives mulled new ideas to put more flesh on subsidiarity.
News

The long-awaited State of the Union address delivered by European Commission President Jean-Claude Juncker on Wednesday (13 September) has boldly set a plan for EU institutional change, without changing the Treaties.
Blog

Over the years, step by step, the European Parliament has won a share of real constitutional power. Today, circumstances have thrown it a golden opportunity to take another major step – but it looks as though MEPs are going to retreat again, argues Andrew Duff.
Opinion

The mantra of European elites for the support of the Lisbon Treaty included greater transparency of the decision-making process. Almost ten years after signing the Treaty, Mirek Topolánek says he now knows "for sure" that his support was unnecessary.
News

The European Commission has revealed its long-awaited reform of the so-called comitology decision-making process. But it has already been criticised for not being ambitious enough and concerns have been raised about whether the proposal stands any chance of being approved.
News

The EU this weekend scolded the British tabloid press for claiming it is demanding that its flag be flown at sporting events and displayed on team shirts.
News

The British government on Thursday (2 February) presented its Brexit strategy to parliament, publishing 12 objectives that it believes will secure "a new, positive and constructive partnership" with the EU.
Opinion

Watching Theresa May in a hotel room in the capital of a small European nation, not in the EU, has been a surreal experience. Her insistence that every other EU leader had to accept that their citizens cannot any longer travel to the UK on the terms they can today seemed borderline impertinent, writes Denis MacShane.
News

Britain’s ambassador to the EU has unexpectedly resigned, just weeks before the UK triggers Article 50 to begin negotiating its exit from the bloc, the Financial Times reported Tuesday (2 January).
Interview

Scottish First Minister Nicola Sturgeon warned Monday (24 October) she would not watch her country "driven off a hard Brexit cliff" as she voiced frustration at her latest talks with British Prime Minister Theresa May.
Opinion

Luxembourg's foreign minister, Jean Asselborn, has called for Hungary to be thrown out of the European Union. EURACTIV Germany reports.
Interview

A debate about the future development of the EU has raged across the continent since the UK's Brexit vote. While many believe this is the beginning of the end, others, like Sylvia-Yvonne Kaufmann MEP, see it as an opportunity to start afresh. EURACTIV Germany reports.
Read more »»
RSS - Lisbon Treaty