A new European industrial policy that puts innovation at its heart will help us face up to the economic challenges of the future, argue Máire Geoghegan-Quinn and Gary McGann.
News

Banks will be offered €21 billion of EU funding guarantees to encourage lending to small and medium-sized enterprises (SMEs), which don’t have enough collateral to secure loans.
News 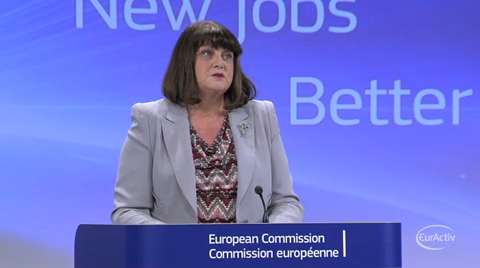 EU, industry to invest €22 billion in research and innovation

The European Commission, member states and industry will invest more than €22 billion over the next seven years in innovation. The investment will primarily go to special sectors via five public-private partnerships called Joint Technology Initiatives (JTIs).
VideoPromoted content
Innovation & Industry 10-06-2013

Without more private R&D spending, Spain, Italy and others in the south may continue to lag as national governments and the EU are slashing money earmarked for research and innovation. Critics of government cuts say these risks are creating a vicious circle, discouraging business.
VideoPromoted content
Economy & Jobs 05-11-2012

As Europe faces its highest unemployment rate in more than two decades -- and hitting today's young adults particularly hard -- StartUp Europe is being established to stem the current "brain drain" of talent from the region and empower youth, technology and entrepreneurship. StartUp Europe is a centre of excellence to develop and support entrepreneurship and drive job creation in Europe and is a collaboration between Telefónica and the Lisbon Council - the Brussels-based think tank.
VideoPromoted content
Energy & Environment 14-02-2012

The European Commission on Monday unveiled its new so-called "bio-economy" strategy. The plan wants to see Europe's economy make a transition to a post-petroleum era. By investing in innovation and technology, Europe hopes to develop cleaner and more sustainable ways to exploit its natural resources while at the same time creating jobs and staying competitive.??In the EU, the bio-economy already has a turnover of nearly 2 trillion euros and employs more than 22 million people.
Interview
Science & Policymaking 05-05-2010

Geoghegan-Quinn: We must communicate our R&D

Europe is doing "wonderful" research but has failed to communicate this to the public, EU Innovation Commissioner Máire Geoghegan-Quinn told EURACTIV in an interview. She wants to rename 'FP8', the European Commission's research programme, to make it more meaningful to citizens and is pledging to make funds more accessible to small businesses.
RSS - Máire Geoghegan- Quinn