Climate neutrality translates into commitments undertaken by various industries, communities and other stakeholders. The European energy sector is already committed to be carbon neutral before 2050. However, some countries are already fully decarbonised in terms of power generation, while others...

EU leaders are under pressure to reach a deal on the next Multiannual Financial Framework and the Recovery Fund as they are heading into their fourth day of negotiations.
Promoted content 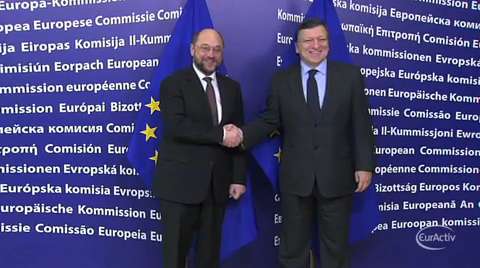 MEP's on Wednesday rejected the next long-term EU budget deal agreed by European leaders earlier in February. Adopted by an outstanding majority, the resolution will give European Parliament's President Martin Schulz enough room to negotiate and obtain concessions from EU leaders. "The Parliament wants to be taken as a serious partner. We are prepared to negotiate; this is an offer now, from the EP to the Council, to come to compromises and to improve the Multiannual Financial Framework (MFF)', said European Parliament's president Martin Schulz.
Promoted content
Agrifood 07-02-2013

This is traditional Baltic music. The singers are farmers from from Latvia, Lithuania and Estonia As European leaders gather on Thursday to discuss the next long-term EU budget, Baltic farmers travelled to Brussels to protest against what they believe is an unfair treatment from the EU. The agricultural funding they get currently is much less than the EU average.
Promoted content
Future EU 06-02-2013

Only two days before EU leaders will hold talks on the next 7-year EU budget, MEPs on Tuesday threatened to veto the eventual agreement if further cuts are made. Some member states, like the UK, the Netherlands and Sweden, have expressed their wish to slash the budget by an additional 30 billion euros. They argue that EU expenditure should be in line with national austerity policies. "Today's proposal is actually an act of political resignation, and we are going to reject it", EPP leader Joseph Daul said.
Promoted content
Banking union 11-01-2013

European Commission President Jose Manuel Barroso and his team of EU commissioners travelled to Dublin on Thursday to mark the start of the Irish presidency. Prime Minister Enda Kenny wants to use his presidency term to clinch a deal on restructuring Ireland's bank debt and successfully exiting the bailout programme. Banking supervision and reaching a deal on the EU budget will also be amongst Dublin's priorities.
RSS - MFF