Mariya Gabriel, the European Commissioner in charge of digital policies, will announce a plan to get rid of mobile fees between the EU and Western Balkan countries at a May 2018 summit in Bulgaria.
Interview

MEPs want to put a price cap on calls and text messages from one EU country to another, arguing those rates are outrageously high for many consumers.
Video 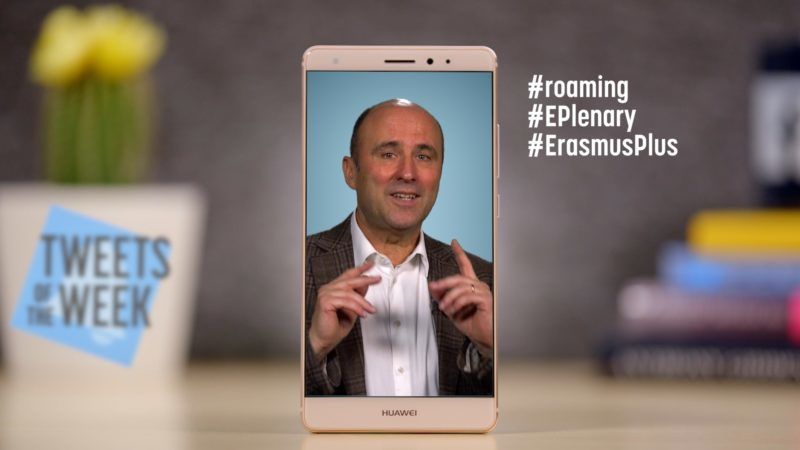 This week we look at the end of roaming, the European Parliament plenary, and Erasmus turning 30.
News

The Brief, powered by Eni: EU wants us out of the roam zone

Hats off to the European Commission for squeezing two crowd-pleasing stories into one week. Just yesterday, Jean-Claude Juncker celebrated the 1 million 'Erasmus babies' (TMI, really) during a celebration of the programme. Tomorrow the EU wants to score again when it gets rid of mobile roaming fees within Europe.
News

The European Union's digital chief Andrus Ansip said that failure to solve the last remaining barrier to abolishing mobile roaming charges across the bloc in June would lead people to question its ability to deliver on promises.
News

Mobile telecoms operators across Europe could be allowed to charge each other higher fees for keeping customers connected when they travel abroad, under a Spanish proposal to help firms recoup their costs when roaming charges are abolished.
News

In a bid to save face after a wave of outrage following a botched first attempt earlier this month, the European Commission proposed a new bill today (22 September) to get rid of mobile roaming charges by next year.
News

Telecoms companies were as surprised as anyone when Jean-Claude Juncker announced Wednesday (14 September) that the European Commission wants every city and village in the EU to have free public Wi-Fi in some places by 2020.
Policy Brief

Telecoms operators and car manufacturers have asked the European Commission to put money into a major, four-year project running driverless cars between EU member states, in the first test of the new technology between more than one country.
News

The European Commission's digital single market strategy turns one year old today. With seven months left in the 16-point policy plan, the executive has only scratched the surface.
News

British consumers can rest assured they'll benefit from EU plans to drop roaming charges in 2017—regardless of the outcome of the UK referendum on EU membership, a British official told a concerned House of Lords committee yesterday (7 September).
News

The European Union's ambition to end mobile roaming charges for citizens travelling across the continent is being stymied by member states backing their national operators, officials say.
News

The European Commission and Parliament have long been pushing for a removal of EU roaming fees. But a recent move by German Transportation Minister Alexander Dobrindt could bring Europe closer to phasing out costs for mobile phone users in other EU member states. EURACTIV Germany reports.
News

The elimination of roaming fees for using mobile phones EU countries could be delayed, in what would be a win for big European telecoms operators at the expense of consumers, according to a draft EU proposal.
Read more »»
RSS - mobile roaming