A five-way summit hosted by Uzbekistan’s President Shavket Mirziyoyev took place in the Kuksaroy Palace in Tashkent, the country's capital, on Friday (29 November). The second meeting of Central Asia leaders in as many years focused on geopolitics and stability, but also on environmental concerns.
Special Report

From the early stage of its post-Soviet transition, Kazakhstan has consolidated strong state power to avoid chaos. Today, as the country is considered successful at home and internationally, this centralisation is being reduced and tribute is being paid to the one person who steered the country during the last 30 years.
Special Report

Kazakhstan is investing in human capital and plans to become one of the world’s 30 most advanced nations by 2050. At a recent conference in the capital Nur-Sultan, leaders and economists offered advice, valid also for other countries as well: to focus on education.
Special Report

The first President of Kazakhstan, Nursultan Nazarbayev, was the main speaker and the centre of attention at the 12th edition of the Astana Economic Forum on Thursday (16 May). To a wide international audience, he provided explanations for his recent...

New candidates have emerged for the 9 June presidential elections in Kazakhstan, which take place after the first president of the country, Nursultan Nazarbayev, surprisingly resigned on 19 March. But many observers believe the long-serving leader is still calling the shots.

Kazakhstan's President Kassym-Jomart Tokayev set on Tuesday (9 April) the date for the early presidential election for 9 June and said the vote was “absolutely needed” to ensure “continuity, predictability and stability” after the long-serving President Nursultan Nazarbayev resigned.

The President of Kazakhstan Nursultan Nazarbayev has re-shuffled the cabinet, appointed a new foreign minister and given this ministry new powers and responsibilities, especially for attracting new foreign investment.

The EU is taking seriously the idea expressed recently by the President of Kazakhstan Nursultan Nazarbayev for holding a four-way summit to defuse global tensions, an EU diplomat told an audience on Tuesday (4 December).

The president of Kazakhstan, Nursultan Nazarbayev, has warned of a risk to post-World War II order and proposed that his country host a conference of the Organisation for Security and Cooperation in Europe (OSCE) in 2020 with the purpose of “updating” the 1975 Helsinki Final Act of the then CSCE.
Special Report

Kazakhstan got praise today (10 October) for hosting for the sixth time the Congress of the Leaders of World and Traditional Religions, which traditionally issues messages of peace, mutual respect and tolerance. A few religious leaders however defended their countries controversial policies.
Special Report 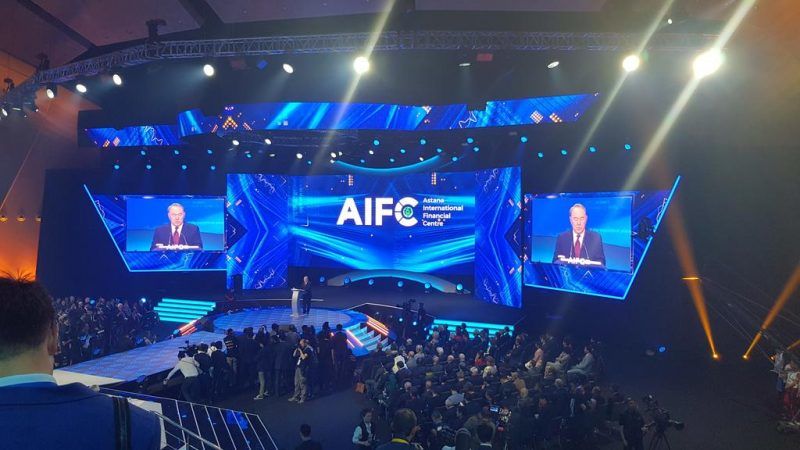 The “Astana International Financial Centre” or AIFC, was inaugurated today (5 July) at a lavish ceremony in the Kazakh capital.
Special Report

Roman Vassilenko, deputy minister of foreign affairs of Kazakhstan, met on Wednesday (4 July) with a group of international journalists from around the world to field questions about his country's development and the China-promoted Belt and Road initiative.
Special Report

The President of Kazakhstan Nursultan Nazabayev is in the US where he met on Tuesday (16 January) with US President Donald Trump. But the main purpose of his visit is a speech at the United Nations where Kazakhstan holds the Presidency of the Security Council for January.
Special Report

A flurry of diplomatic activity continued in Astana on Wednesday (1 November), marked by the visit of the King of Jordan, Abdullah II, who was awarded a prize for fighting against nuclear proliferation.
Special Report

Kazakhstan inaugurated a Low Enriched Uranium Bank on Tuesday (29 August), backed by the IAEA. The EU, one of the project's biggest donours, hailed it as a “success for international cooperation” on non-proliferation. EURACTIV.com reports from Ust-Kamenogorsk and Astana.

Central Asian countries are exploring forms of integration resembling those of the European Union, the latest one being the establishment of free movement of people and workers between Turkey and Kazakhstan.
RSS - Nursultan Nazarbayev