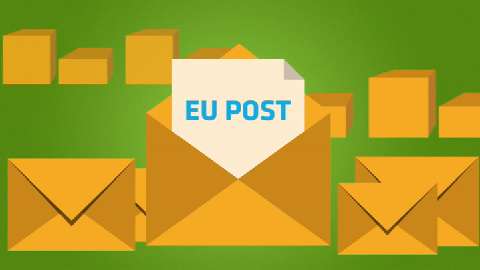 The European Postal Industry in 2014

With new EU rules requiring national postal operators to give up lucrative lingering monopolies by 2011, France is looking for new funding mechanisms to ensure that even citizens in its remotest areas continue to receive an affordable, six-days-a-week service, EURACTIV.fr reports.
News

A European court has dealt a blow to the EU executive by overturning its 2002 decision to confiscate "illegal" state aid received by the German postal operator. The ruling took place just one week after Brussels announced tougher action against mail operators attempting to shield their remaining monopolies.
Interview

Speaking at a high-level conference on postal liberalisation on Tuesday (24 June), the EU's commissioners for competition and the internal market warned countries with lingering postal monopolies to open up or face legal action.
News

Germany's Deutsche Post yesterday (11 June) filed an official complaint with the European Commission against the Dutch government's decision to delay the opening of its mail market. The move comes amid increasing concern over the difficulties linked to the practical implementation of new EU rules.
News

The introduction by the German government of a minimum wage of €9.80 an hour for all postal workers has been ruled illegal by a Berlin court, marking a victory for foreign operators wishing to enter the country's recently opened postal market.
News

A vote in the European Parliament paving the way for unbridled competition among postal operators has been welcomed by many as a key step in improving the quality and efficiency of mail services across Europe. But others fear the new law will lead to massive job cuts and a deterioration of working conditions.
News

The liberalisation of the Dutch postal market will not go ahead as planned on 1 January 2008 due to the "lack of a level playing field", notably caused by the introduction of a minimum wage for postmen in Germany. The delay highlights the difficulties linked to the practical implementation of new EU rules on opening up European postal markets to competition.
News

As rules on liberalising Europe's postal markets look to be adopted in the New Year, Pál Szabó, CEO of Hungary's Magyar Posta, points to a number of "bad experiences" in countries that have already opened up their postal markets to competition and stresses the need for a "sustainable financing solution" to allow operators to continue providing citizens with quality mail delivery.
Interview

As rules on liberalising Europe's postal markets look set to be adopted in the New Year, Pál Szabó, CEO of Hungary's Magyar Posta, points to a number of "bad experiences" in countries that have already opened up their postal markets to competition and stresses the need for a "sustainable financing solution" to allow incumbent operators to continue providing citizens with quality services.
Opinion
Transport 24-10-2007

How to regulate the postal industry: an economic approach

Regulators and lawmakers are failing to understand the economics of the postal industry, claims the International Post Corporation (IPC) in a joint study undertaken in conjunction with the German Institute for Economic Research (DIW).
News

Member states have reached a compromise deal to liberalise postal services in the EU by 2011, following 20 years of Commission-led negotiations to open up the sector. Luxembourg and ten other member states were granted two-year exemptions.
Interview

‘No agreement possible on liberalising postal markets by 2009’

With Portugal currently at the EU's helm, the country's Public Works, Transport and Communications Minister Mário Lino talks exclusively to EURACTIV about achieving a compromise between all 27 member states on the sensitive issue of opening up national postal markets to competition, and describes the main elements of a deal that he believes will garner the backing of his 26 European counterparts.
News

Mário Lino, Portugal's minister in charge of postal affairs, has spoken to EURACTIV about his hopes of clinching a political agreement on the sensitive subject of opening up national mail services to full competition, at a meeting of EU transport and communications ministers next week.
News

Despite strong opposition from postal workers, members of the European Parliament gave the green light to postal liberalisation. Nevertheless, MEPs agreed that member states should have at least an extra two years – until 2011 – before having to complete full market opening.
News

The European Parliament will, on 10 July 2007, vote on controversial plans to open up European postal markets to competition – a move feared by trade unions and lingering national monopolies, but which the Commission says is essential for the survival of the sector and will make services cheaper, faster and more innovative.
News

Members of Parliament’s transport committee overwhelmingly voted in favour of delaying the liberalisation of Europe's postal markets to 2011, in a move that will displease Internal Market Commissioner Charlie McCreevy.
News
Transport 08-06-2007

A Commission proposal to open Europe's postal markets to full competition provoked a rift between member states as France, with the support of trade unions across Europe, opposed the 2009 deadline upheld by EU Presidency-holder Germany.
Interview

Derek Holt, director at independent economics consultancy Oxera shares his view with EURACTIV on how to finance the universal-service obligation in the context of further liberalisation in the European postal sector.
Interview

While the goal of liberalising the postal sector is more or less broadly backed, divisions remain as to the 'when' and the 'how', says Professor Paul R. Kleindorfer, an expert on postal liberalisation, in an interview with EURACTIV.
News

Members of a key committee in the European Parliament are set to demand a delay in reforms as plans to subject Europe's postal sector to full liberalisation by 2009 sparks fury among postal workers across the continent.
News
Transport 26-04-2007

German MEP Markus Ferber, rapporteur on postal reform, has sided with his native country's view that the postal market should be fully liberalised by 2009. He shared his views with EURACTIV ahead of key Parliament committee votes on 2-8 May.
Read more »»
RSS - postal liberalisation