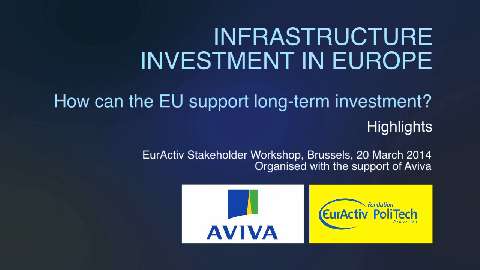 Infrastructure Investment in Europe: How can the EU support long-term investment

The European Commission is preparing to launch its response to the Green Paper on Long-Term Financing, which seeks to encourage and diversify the supply of long-term finance.
Opinion
Euro & Finance 30-10-2013

The use of one of Europe’s first project bonds to help finance a gas storage plant off Spain’s coast has run into trouble. This does not bode well for the future use of such bonds, or the types of project that they are being used to finance, write Elena Gerebizza and Xavier Sol.
News
Euro & Finance 11-10-2013

The building of a large offshore submarine gas storage facility in Spain has been halted due to earthquakes detected in the area. The so-called Castor Project is the first in Europe to issue ‘project bonds’ for a total of €1.4 billion.
News
Trade & Society 02-09-2013

A large offshore submarine gas storage facility in Spain was the first in Europe to issue ‘project bonds’ for a total of €1.4 billion, three years after the idea was launched by European Commission President José Manuel Barroso.
News

European Commission President José Manuel Barroso has said he will propose a roadmap and "calendar" for more European integration at the next summit of EU leaders on 28-29 June, without discarding the possibility of a treaty change aimed at injecting more federalism into the Union.
News

‘Project bonds’ launched as an experiment

In the absence of an agreement for launching Eurobonds, the EU institutions agreed yesterday (22 May) to launch the first ‘project bonds’ as a pilot project to boost investment in energy, transport and the digital economy.
News

?The European Commission is preparing a €200 billion “pact for growth” to be presented at the next EU summit in June.
News

European Commission proposals to introduce project bonds are beset by deficiencies and shrouded in commercial secrecy, write Isabella Besedova of the CEE Bankwatch Network in an exclusive op-ed for EURACTIV.
News

EU plans to create a market for project bonds to cover the €2 trillion of investment needed to upgrade the bloc's infrastructure by the end of the decade have received a positive evaluation from credit rating agency Fitch, but are unlikely to secure a top rating.
News

Barroso promises to go ahead with EU project bonds

The president of the European Commission unveiled plans on Tuesday (7 September) to raise new sources of finance to fund EU infrastructure projects.
News

As Europe mulls measures to tackle the worst economic crisis to hit the continent since 1929, the idea of issuing EU bonds to fund key projects and ultimately create new jobs is gathering momentum and spurring debate.
RSS - project bonds