France ordered the temporary closure of a mosque outside Paris on Tuesday (20 October), part of a crackdown on Muslims who incite hatred after the decapitation of a teacher who showed his class caricatures of the Prophet Mohammad. The Grand...
News

Closer ties to the West are the most effective tool to counter jihadism and Islamic radicalisation in the Western Balkans, experts told a conference in Brussels this week. Meanwhile, concerns about returning foreign terrorist fighters remain.
News

Returning foreign fighters, along with home-grown radicals, are heightening concerns that further attacks could be afoot. Dr. Demir Murat Seyrek and Amanda Paul argue there is room to beef-up security measures without creating a “police state” and maintaining respect for individual rights and liberties.
Opinion

EU-funded videos used for an anti-radicalisation campaign could in fact be considered as recruitment tools such as Islamic State, warns Eli Hadzhieva.
Opinion

The recent debate over the Salafist cleric in Belgium shows that non-violent extremism cannot be ignored, writes Eli Hadzhieva
Interview

Kazakhstan sees the Eurasian Economic Union purely as a means to develop economic relations, while it strives for much deeper integration with its Central Asian neighbours, based on the model of the European Union, Sanat Kushkumbayev told EURACTIV.com in an exclusive interview.
News 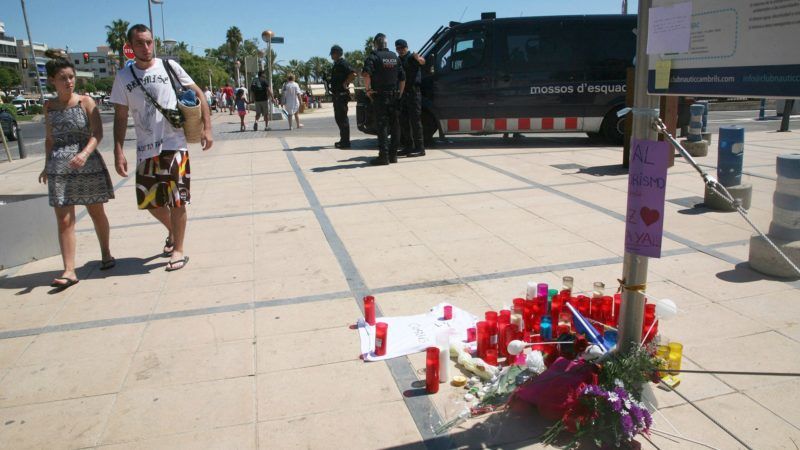 Spanish police searched on Sunday (20 August) for the man behind the wheel in the Barcelona van attack that killed 13 people, amid growing signs members of the militant group had connections elsewhere in Europe.
News

An explosion rocked the central train station in Brussels yesterday evening (20 June) and a man was shot by police during the incident, prosecutors told Belgian media. He was later reported dead.
News

Facebook said it wanted to make its social media platform a "hostile environment" for terrorists in a statement issued after attackers killed seven people in London and prompted Prime Minister Theresa May to demand action from internet firms.
News

From South America to the Middle East, the effects of climate change appear to exacerbate the problems of organised crime and terrorism. The UN and German think tank Adelphi have raised the alarm. EURACTIV France reports.
News

EXCLUSIVE/ EU Security Commissioner Julian King warned of the ‘growing menace’ of violent, right-wing extremism, as a possible backlash against the ongoing attacks by jihadists.
Opinion

Today's anniversary of the terror attacks in Brussels on 22 March 2016 provides a perfect opportunity to reflect on the challenge posed by jihadist radicalisation and the need for effective prevention policies across Europe, write Alexander Ritzmann and Andrea Frontini.
News

Italy's government said yesterday (5 January) it would try harder to combat Islamist radicalisation in its prisons and on the internet as it defended plans to build more detention centres for migrants who have no right to stay in the country.
Interview

Frans Timmermans said Europe’s social contract is broken; social mobility is a thing of the past and we have let our young citizens down. He believes urgent action must be taken to save the European Union. An interview by EURACTIV's partner Ouest-France.
News

Poor information sharing between security services is one of the great shortcomings of European cooperation. About 5,000 Europeans are thought to have joined extremist groups in Syria and Iraq, but only 1,615 appear on Europe’s official list.  EURACTIV Spain reports.
Opinion

It is simplistic to blame Belgium for Europe’s vulnerability to terrorism. The NSA, CIA, and FBI were alerted before the 9/11 attacks, but the terrorists slipped through their fingers, writes Sir Micheal Leigh.
News

The fight against radicalisation has so far received the smallest contribution from the EU security budget, despite pledges by European Union leaders to prioritise the issue following the terrorist attacks in Paris and Brussels.
Read more »»
RSS - radicalisation