Former Ukrainian President Petro Poroshenko is fighting a court decision to have him brought in by force for questioning by the State Bureau of Investigations (SBI). Poroshenko's lawyers and his party said this latest development illustrates what the West calls “selective justice” in Ukraine.
News
Europe's East 07-10-2013

EU envoys formally asked Ukrainian President Viktor Yanukovich to pardon his jailed opponent Yulia Tymoshenko, while she signalled for the first time that she was ready for an agreement that would send her to Germany.
Opinion
Europe's East 04-10-2013

Tymoshenko’s prosecutor gets another job. What’s behind the scenes?

Renat Kuzmin, the prosecutor investigating Yulia Tymoshenko, has suddenly got another job. Maybe it’s too early to see an opening vis-à-vis the EU, but the issue is worth following, writes Vadym Omelchenko.
News

An institutional crisis of the kind the EU cannot afford would happen if the European elections put forward a candidate for Commission president who would not have the support of his own country, Günter Verheugen, former Commission vice president and enlargement commissioner, told EURACTIV Poland.
News
Elections 04-07-2013

Failure to sign an association agreement with Ukraine at a regional summit in November would be a blow for the EU’s Eastern Partnership initiative aimed at pulling six former Soviet republics closer to the EU, Lithuania’s foreign minister said. EURACTIV reports from Vilnius.
News

The planned sign-off of a wide-ranging EU-Ukraine Association Agreement at the November Eastern Partnership summit is "clearly" at risk, according to the Polish Foreign Minister, Rados?aw Sikorski. He urged Ukrainian authorities to “speed up” reforms and fulfil the EU's conditions by the end of summer, and not to wait until the last moment.
News
Energy 23-05-2013

Ukraine is taking “active steps” to win the sympathy of Germany, the country most strongly opposed to the signature of a landmark association agreement with the EU in the absence of a solution to the imprisonment of former prime minister Yulia Tymoshenko, diplomats told EURACTIV.
VideoPromoted content 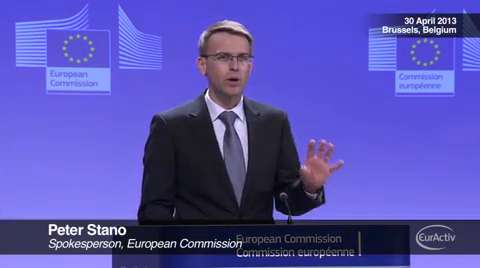 The European Union has urged Ukrainian authorities to “reconsider thoroughly” the imprisonment of  Yulia Tymoshenko following a European Court of Human Rights ruling that the arrest of the former prime minister was illegal and politically motivated.
News
Europe's East 02-05-2013

The European Union has urged Ukrainian authorities to “reconsider thoroughly” the imprisonment of  Yulia Tymoshenko following a European Court of Human Rights ruling that the arrest of the former prime minister was illegal and politically motivated.
News
Europe's East 19-04-2013

A move by the European Parliament to extend its observation mission in Ukraine, led by the former presidents of Ireland and Poland, has been viewed as a sign of hope that the country can finalise its association agreement with the EU by the end of year.
News
Europe's East 08-04-2013

Petro Poroshenko, a former top government minister and an influential businessman, said yesterday (7 March) he regretted the “selective justice” that led to an opposition lawmaker to lose his parliamentary seat.
News
Europe's East 06-03-2013

The 25 February EU-Ukraine summit is not expected to make a breakthrough in relations between Brussels and Kyiv, but it can set the course for improvement ahead of the Vilnius Eastern Partnership summit in November, Amanda Paul, analyst at the European Policy Centre, told EURACTIV in an exclusive interview.
News
Europe's East 24-01-2013

The EU-Ukraine summit scheduled for 25 February may mark a low point in the relations between Brussels and Kyiv, with diplomats warning that it would be “impossible” to move forward without solving the case of imprisoned former Prime Minister Yulia Tymoshenko, who is now accused of commissioning a murder.
News

EU ministers adopted yesterday (10 December) a rather long text on the Union’s relations with Ukraine, leaving options open for the holding of a bilateral summit and for signing the association agreement in 2013, provided that they see “determined action” in a number of areas, including “progress in addressing the issue of selective justice”.
News
Europe's East 30-11-2012

Štefan Füle, European Commissioner for Enlargement and Neighbourhood Policy, has poured cold water over Ukraine’s ambition to hold a summit with the Union and sign an Association Agreement.
Special ReportNews
Economy & Jobs 25-09-2012

The European Commission is concerned about the many “stumbling blocks” which prevent it from proposing member states to sign the Association agreement and the Deep and Comprehensive Free trade Agreement (DCFTA) with Ukraine, Commissioner Karel De Gucht said yesterday (24 September), in an interview with EURACTIV.
News
Europe's East 22-08-2012

Ukrainian Prime Minister Mykola Azarov said his country was “taken hostage” over the case of his imprisoned predecessor, Yulia Tymoshenko, which he said was overblown because of a “foreign plot” to prevent the country from getting closer to the EU.
Read more »»
RSS - selective justice