Germany's Social Democrats have circulated a damning paper to their European political group in which they call Ursula von der Leyen an "inadequate and inappropriate candidate" to lead the European Commission ahead of a vote on her nomination next week.
News

Ahead of Wednesday's (5 June) general election in Denmark, one thing is certain: immigration policy will remain tough.
News

The centre-right People's Party (ÖVP) of Austrian Chancellor Sebastian Kurz is on course for gains in the European elections, with the far-right Freedom Party coming third, according to a media forecast published on Sunday (26 May).
News

Europe needs a new vision and new goals, and all true Europeans have to defend EU values in campaigning for next year's elections and forming a new governance system afterwards, said Udo Bullmann, the leader of the Social Democrats (S&D) in the European Parliament.
News

Sweden's Social Democratic Prime Minister Stefan Löfven has probably never stood so alone: roasted by the right for leaving the door wide open to asylum-seekers and lambasted by the left for later slamming it shut.
Opinion

Former Danish Prime Minister Helle Thorning-Schmidt, who was also the leader of the Social Democrats in her country from 2005 to 2015, made an appearance in Brussels today (11 June) offering her views how the EU should better makes it case globally and improve internally.
News

The Czech ruling ANO party could be days away from agreeing the text of a coalition agreement with the center-left Social Democrats, an ANO official was quoted as saying today (2 May), raising hopes for an end to months of political instability.
News 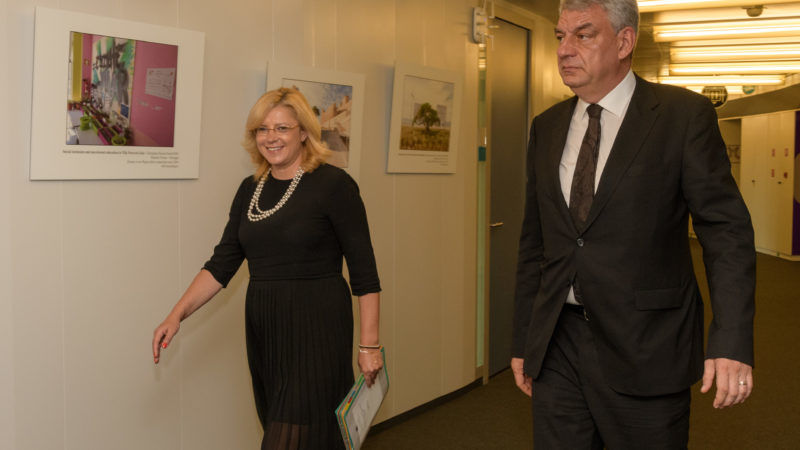 Austria's main parties agreed to hold an early parliamentary election on 15 October, Chancellor Christian Kern said yesterday (16 May), in a vote that might bring the far-right Freedom Party into government.
Opinion

Germany's centre-left candidate for Chancellor, Martin Schulz, has criticised US President Donald Trump's policies as "un-American" and warned against lifting sanctions imposed against Russia over its role in the Ukraine crisis.
News

Macedonia's president on Monday (30 January) resumed the search for a new prime minister after the former premier failed to form a government, despite his party's narrow election victory.
Read more »»
RSS - social democrats