This week on EURACTIV’s Yellow Room, we are talking about Friday’s EU summit, where the leaders are expected to discuss security and defence issues. During the first part of their meeting, they will be joined by NATO Secretary-General Jens Stoltenberg...
Video

Differences between Merkel and Macron are slight but real

French President Emmanuel Macron and German Chancellor Angela Merkel gave their views on Europe in their concluding remarks at the end of the European Council Summit on Friday 18 October. Although they attempted to show a united front on EU issues, differences persisted. EURACTIV France reports.
News

EXCLUSIVE / A spat between Germany and Poland almost derailed plans for European Union leaders to call for the swift signing of the Paris Agreement on climate change at today’s summit in Brussels.
News

Failure to agree a deal with Turkey at today’s summit on migration will condemn Greece to becoming the refugee camp of Europe, Commission First Vice-President Frans Timmermans warned on Wednesdays (16 March).
Opinion

Potentially a 'momentous' deal, argues Solon Ardittis, but the EU-Turkey agreement on a refugee swap  must pass some serious legal hurdles first.
News

SPECIAL REPORT / France and Germany responded to escalating rows over espionage by the US by announcing a review of security relations to be completed by the end of the year. Meanwhile, the adoption of a proposed EU data protection regulation was delayed until 2015.
VideoPromoted content 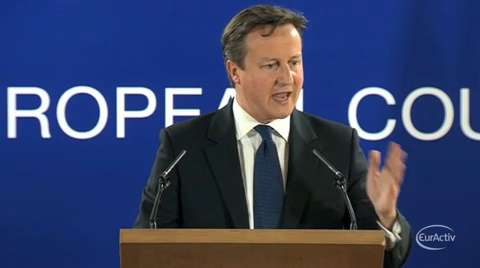 Cameron: “In this town you have to be ready for an ambush”

The British Prime Minister vented frustration with Brussels and the institutions in his post-summit press briefing describing how he “defeated” an eleventh-hour attempt to unpick the British rebate. Read the full article: http://www.euractiv.com/uk-europe/cameron-locks-loads-overcome-fru-news-528968
News
EU Priorities 2020 22-05-2013

A proposal by European Council President Herman Van Rompuy to fight tax evasion, heralded in draft conclusions to today’s EU summit, will seek to maintain momentum on the EU savings directive by asking leaders to agree the initiative by the end of the year.
Opinion
Central Asia 20-12-2012

How a Nobel Peace Prize winner should approach Putin

The European Union - winner of this year’s Nobel Peace Prize - should take a strong stand against the ongoing destruction of civil society in Russia at the summit with Vladimir Putin,  write Adam Bodnar and Dominika Bychawska-Siniarska.
Interview
Science & Policymaking 04-12-2012

Research institutions must realise that there are smarter ways to use the funds they have. The entire focus of the European Gender Summit is to highlight gender as a tool for making research more effective and for achieving results of a higher quality, says Curt Rice.
Opinion
Competition 26-11-2012

To avoid a lost decade for the competitiveness of the European economy, EU leaders will need to summon the same energy they used to prevent a catastrophic economic meltdown, say Carl Björkman and Guillaume Amigues.
Special ReportOpinion
Global Europe 23-11-2012

The simple expectation from the Ukrainian authorities that the EU won't let Ukraine transformation into a new Belarus allows the current Ukrainian administration to manipulate the position of official Brussels in favour of itself, says Viktor Tkachuk.
Opinion
EU Priorities 2020 22-11-2012

After more than two years of campaigning for a social pillar in the EU budget, the proposals made last week are extremely disappointing and worrying, writes Pierre Baussand.
News
Social Europe & Jobs 21-11-2012

Thousands of staff members working at the EU institutions are expected to go on strike in Brussels today (8 November) to protest against potential budget cuts. If unsuccessful, unions plan another strike during the EU summit later this month.
News

European Council President Herman Van Rompuy is poised to broker a deal over the stalled European patent at an EU summit starting tomorrow (28 June) in Brussels. EURACTIV Italy reports from Rome on the possible breakthrough.
Interview

The eurozone crisis is reaching a new stage. It is no longer evolving in small economies, but also in large economies, Maria João Rodrigues tells EURACTIV Slovakia.
News

Ahead of yesterday's EU summit, Swedish Prime Minister Fredrik Reinfeldt criticised both the 'project bonds' and the 'Eurobonds' that were put forward as a way to relaunch the European economy.
Special ReportNews

The informal summit for growth tonight [24 May] has been widely touted as a showdown between the ‘austerity’ policies advocated by German Chancellor Angela Merkel, and the 'growth agenda' of newly elected French President François Hollande. EURACTIV's network reports.
News

The latest draft of the fiscal compact - which we reveal here - includes a new clause compelling countries to ratify the pact or face losing lines of bailout cash as a penalty.
News
Euro & Finance 16-12-2011

Forum in December, summit in January to draft new treaty

A forum with around 100 delegates is likely to be convened before the end of the year to debate the proposed new intergovernmental treaty – to be signed by all EU member states apart from the UK – EURACTIV has learned.
Read more »»
RSS - summit