The Czech, Hungarian, Polish and Slovak prime ministers who met in Prague in the framework of the Visegrad Four (V4) group called for an alternative back-up plan to stop refugees at Greece's borders with Bulgaria and Macedonia, in case present measures prove ineffective.

Countries on the European Union's eastern flank will meet next week and try to provide a joint response on the recent proposal to keep Britain in the EU bloc, Hungary's Foreign Minister Péter Szijjártó said yesterday (4 February). 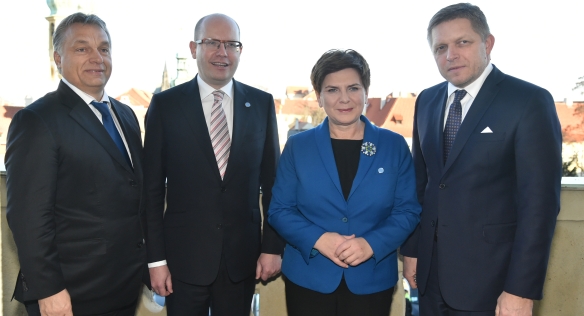 Four eastern EU member states yesterday (3 December) rejected the idea of cutting the 26-member passport-free Schengen zone down to include fewer countries as a way to cope with the refugee and migrant crisis.

The Czech government has proposed that three central European states send hundreds of troops and police to help protect Hungary's borders against the flow of hundreds of thousands of refugees into Europe's Schengen passport-free travel zone, officials said on Friday (5 October).

Prime Minister Robert Fico said he regrets that it has become a “fashion” in Slovakia for companies not to pay their taxes. EURACTIV.sk reports.

The Visegrad countries - the Czech Republic, Hungary, Poland, and Slovakia - have agreed to form a joint military force that should be operational by 2016. EURACTIV Poland reports.
RSS - V4