Vladimir Putin's strategy is to install pro-Moscow politicians in Ukraine. If Europe consents, his next stop will be the Baltic countries, with NATO incapable of defending them, which will put an end to the organisation, Ilya Yashin told EURACTIV.com in an exclusive interview.
News

The EU has disbursed billions of euros to Ukraine, largely for budget support, but the European Court of Auditors (ECA) admitted yesterday (6 December) it was unable to say how the money was spent.
News

When Ukrainians toppled a pro-Russian president last year, nowhere was the euphoria greater than in Lviv, a short drive from the EU border, where people have dreamt for generations of escaping Moscow's orbit.
News

Putin was ready to put nuclear forces on alert over Crimea, says film

Despite being missing for ten days, Vladimir Putin still managed to grab headlines yesterday (15 March), after an interview recorded before his disappearance, in which the Russian president said he was ready to put nuclear forces on alert to ensure the annexation of Crimea, was broadcast.
VideoPromoted content 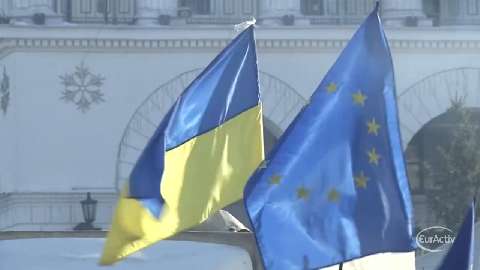 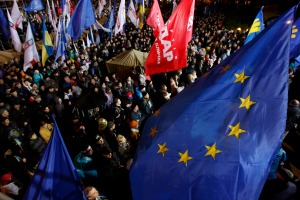 EU heads of state and government gathered in Brussels on Thursday (6 March) to take measures in response to the escalation of the crisis in Ukraine. Follow all the developments as they happen in our live feed, below.
VideoPromoted content
Europe's East 27-02-2014

EU says trade deal with Ukraine ‘still on the table’, as Kiev hopes to sign it at March summit

Ukraine’s new government wants to sign its Association Agreement with the EU on the occasion of the 20-21 March summit of the Union’s leaders, a high-ranking diplomat told EURACTIV on Thursday. Asked if there was a technical obstacle for Brussels that the AA would be signed by the present caretaker government,  Commission spokesperson Olivier Bailly said that the new government was not yet sworn in, and would “look at the options” regarding the AA once this will happen.
Opinion
Europe's East 25-02-2014

The heart of the ‘Euromaidan’ faced with Ukraine’s geopolitical limbo

The political turmoil in Ukraine, which some analysts call a revolution, bears the support of a great part of popular opinion, which sees the protest movement as "justified and good". But the composition of what Western media still like to call “Euromaidan” is very heterogeneous, write Justina Vitkauskaite Bernard and Vira Ratsiborynska.
News 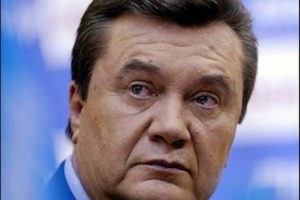 The IMF puts pressure on Kyiv to put an end to a the Soviet-era practice of subsidies in the gas sector, an unpopular move for current President Yanukovitch ahead of the 2015 elections.
Opinion
Europe's East 25-10-2013

As they head for Vilnius, European leaders should remember that Tymoshenko and Yanukovych are not the only people in Ukraine who matter, writes Ian Bond.
News

Ukrainian President Viktor Yanukovich accepted the resignation of Prime Minister Mykola Azarov's government on Monday (3 December), without indicating whether he would re-appoint the long-time ally ahead of tough IMF loan talks.
News

Ukraine's high court rejected today (29 August) an appeal by former Prime Minister Yulia Tymoshenko against her conviction for abuse of office, leaving her in prison and Ukraine's relations with the West severely strained.
Opinion
Europe's East 15-05-2012

European leaders’ boycott of the Euro 2012 football tournament in Ukraine is no great loss, but if they want to truly pressure Kyiv on human rights, they should use the full means at their disposal rather than symbolic posturing, argues Ky Krauthamer.
Opinion
Europe's East 15-05-2012

Who will be the president of Ukraine in 2015?

Europe's second-largest country faces an uncertain future, with both the opposition and the government unable to provide either genuine democracy or economic hope, making necessary the rise of an entirely new political leadership, argues Viktor Tkachuk.
Opinion
Europe's East 03-05-2012

Ukrainians and democracy: From cynicism to people power

The incompetence and corruption of the political class following the 2004 Orange Revolution has led Ukrainians to be deeply sceptical of democracy. Yet they are also becoming increasingly aware of their own ability to influence the government through protest and direct action, argues Lidiya Smola.
News 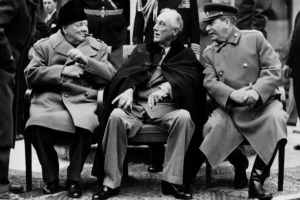 A summit of the presidents of Central European countries due in Yalta, Ukraine, on 11-12 May, will be attended by some EU leaders and boycotted by others, EURACTIV has learned. Ironically, Yalta is a symbol of the division of Europe during the Cold War, following the February 1945 meeting there between Roosevelt, Churchill and Stalin.
Opinion
Central Asia 13-04-2012

Even as Ukraine drifts towards ever-more authoritarian government, the people’s ability to challenge the authorities was illustrated recently by protests against the demolition of a historic squarter in Kyiv, says Roman Rukomeda.
News
Enlargement 04-01-2012

Ukraine's ambassador to Germany, Nataliya Zarudna, says her country is committed to European integration as a 'civilisational choice' and argues that German authorities should be more understanding of her nation's difficulties.
Interview

In a conversation that included the Tymoshenko trial and the Euro 2012 Football Championship, Ambassador Nataliya Zarudna says Ukraine is committed to European integration as a 'civilisational choice' and argues that the German authorities should be more understanding of her country's difficulties.
Special ReportPolicy Brief

The European Union and Ukraine have been long-negotiating an Association Agreement tied with an unprecedentedly far-reaching free trade deal. At stake is not only the economic partnership, but also the country's political future, caught between historic ties with Moscow and uncertain prospects of prosperity and 'Europeanisation' with Brussels.
Opinion
Europe's East 29-11-2011

Even as Ukraine formally gets closer to the European Union with the negotiations on an Association Agreement, the country's extreme economic insecurity and need for foreign capital to finance its debt are enabling a dramatic rise in Russian influence, argues Sonya Koshkina.
Opinion
Europe's East 08-11-2011

Ukraine: Isolation is not the way forward

The guilty verdict of the Yulia Tymoshenko trial raises important questions regarding judicial reform in Ukraine, says Kost Bondarenko. He argues that it would be a mistake for this to lead the European Union to isolate the country at a time when it is under pressure from Moscow to join its own Eurasian customs union.
Read more »»
RSS - viktor yanukovich